The Pteranodon capture is a new Lego set that belongs to the Jurassic World theme which will hit stores next summer. It has only one hundred and seventy four pieces that will feature a blue helicopter, two mini-figures (a pilot and a shooter) , both with different weapons, and of course a small Pteranodon.

I like this heli. It’s not very big which is good in terms of handling and playability and it brings some really nice features to enjoy. The cockpit at the front has a long windshield that opens widely and inside it’s possible to see a printed control panel and two yellow handlers to maneuver the machine.

The landing gear is also quite simple but just above it on both sides there are two weapons to capture the dino, namely a net launcher, similar to the ones used on many other sets, and at the right a new stud shooter with a green tranquilizer. The box seems to bring two additional ammunitions.

Behind the cockpit, there is an additional compartment with no doors that will probably be reserved to transport the shooter. The engine and the propeller on top aren’t very big and the tail, that includes a small propeller, seems also quite balanced. The stabilizer at the back includes a small sticker which I personally pass. 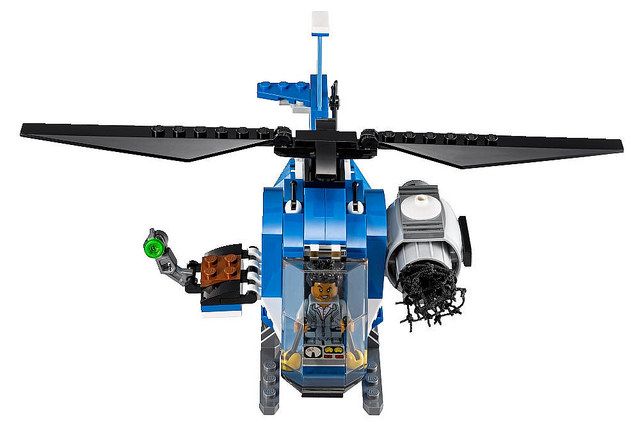 Finally, the mini-figures and the pteranodon are also pretty accurate with really nice details everywhere – I especially like that shotgun. Overall, this is absolutely a great entry set. The helicopter brings a few ideal features in terms of playability and the price, around the twenty dollars won’t surely be a con.