What a huge F1 set!! This new Speed Champions set brings an entire F1 team featuring a big red Scuderia Truck, a Ferrari F14, a small scooter, six (!!!) mini-figures (a couple of pilots, a mechanic and three crew members, all wearing Ferrari suits), and a lot of additional accessories such as two cabinets, a couple of spare tires, lots of different tools for the mechanics and even a second front bumper, a bit different from the one originally mounted.

The truck is absolutely awesome and quite different from the usual. It’s perhaps the first vehicle of this type that has no kind of windshield or glass in any window. All made with red bricks the cockpit seems to have an independent suspension from the rest of the chassis, giving it a very racing look. 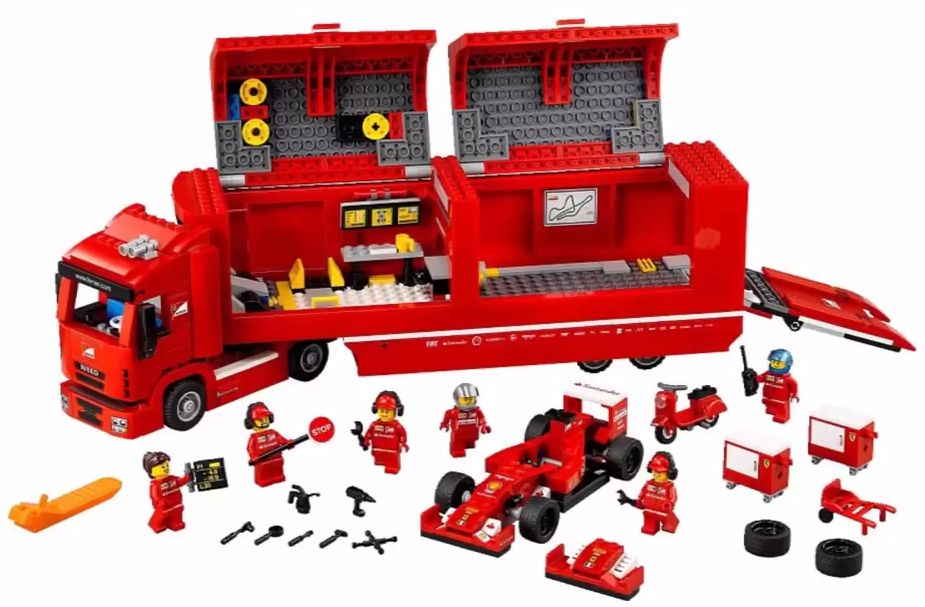 In terms of design and detail, this is probably one of the trucks that are closer to reality, the engine’s grid (it has a small sticker with the truck’s brand) , the lowered suspension, the wheel axes, the steering wheel inside and even the rear mirrors, everything looks perfect in this Ferrari truck!

Attached to it, the big trailer is clearly divided in two compartments, a control room at the front and just next to it, a considerable extra space to transport the Ferrari F1. Both rooms have independent doors, using the same mechanism present in so many other city sets (the roof and the side wall open widely at the same time…) and at the back, the trailer features also a big gate for the F1 car to climb into the trailer. 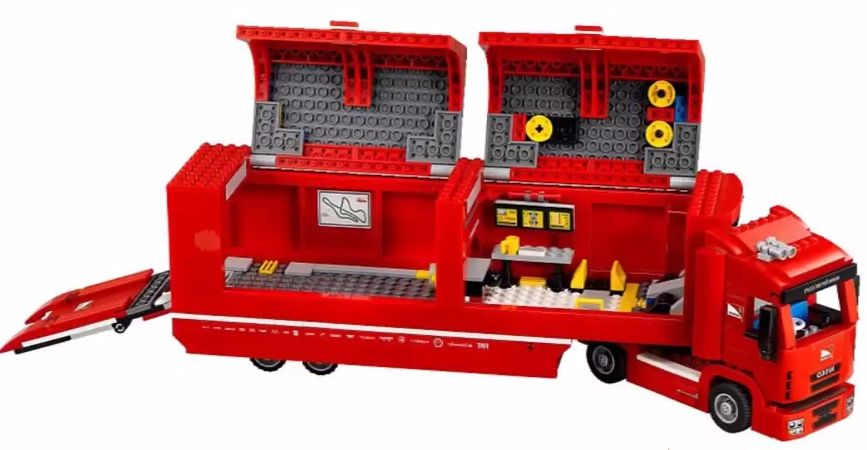 In the control room, it’s possible to see three flat screens, showing some images, a table with a seat and some other additional accessories. The truck’s roof brings also three yellow bricks that honestly I don’t know what they intend to be but probably I would bet on some air conditioning exits.

Next to it and separated by a wall, the back part of the trailer shows a big space to transport the F1. This section seems a bit naked, bringing only a circuit map in the wall and a few safety bricks in the floor in order to transport the car in completely safety. The back door opens easily and looks also quite sturdy when in movement.

The Ferrari F1 is, just as the truck, quite pretty in terms of design and considering its small size, I would say that it brings some nice details. The front bumper can be easily detached and replaced by another, the cockpit is millimetrically adapted to the pilot leaving only space for the steering wheel and finally I would say that looking at the picture, the axes look fatter than usual.

The mini-figures are also an extra reason to buy this set. It’s not every day that we’re in presence of six Ferrari guys which are absolutely outstanding with red printed torsos with plenty of logos. Together with the Ferrari crew we can also find a lot of additional accessories for the mechanics and for the race.

Overall this is another 2015 must. There are no kind of cons in this set and unknowing any type of detail about its real size or price, I would say for sure that it won’t be a problem when it’s time to buy it. The available pictures aren’t much for now but I’m sure that I’ll shortly update this post with some more!