The Porsche 911 GT Finishing Line is another set of the Speed Champions theme that will be available in the beginning of next year and it has absolutely a lot of new stuff to enjoy. It’s almost sure in my opinion that this new theme is be a truly success among the fans.

The set brings two similar Porsche 911, the race finishing (or is it start??)  line, a small structure that includes a pit and a podium, four mini-figures (a female photographer,  the finishing  line judge and the two pilots) and lots of additional accessories: eight different flags, a spare tire, a couple of trophies, and some workshop tools. 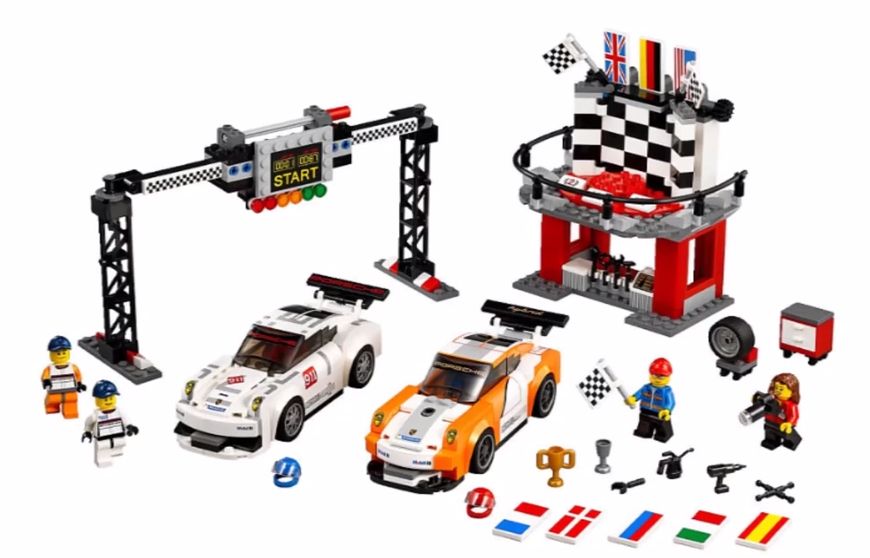 The finishing line structure couldn’t be simpler in terms of building. Two side columns, similar to the ones used in the communication antennas, for instance, in which is based a long white brick.  Once this part is built, the start lights that are made mostly with technic pieces will easily slide through it. I only wonder if the cars have enough space to pass across when they’re in high speed.

The podium looks pretty cool. With a chess wall at the back, it has five flags (one for each podium position and two chess‘s on the edges) on top that gives it a very colored look. A black safety barrier also ensures that no one fall from the first floor when it’s time to celebrate. Talking about celebration, where is the champagne??

The small workshop or pit if you prefer, is a nice way to add some playability to the set with increasing it in terms of size. It’s not very common to see the podium above a workshop but the final result couldn’t be better. Besides the bunch of different tools we can also find a small cart with two drawers and a spare wheel. 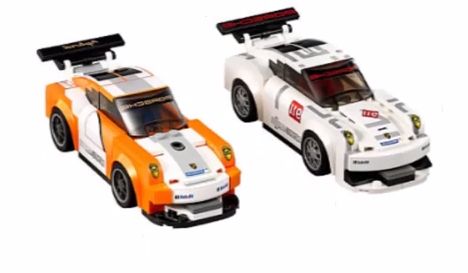 The two porches 911 are simply amazing!! With a similar design (the only differences are the color, the wheels and a couple of details at the front) the engine is placed at the back. The black aileron can assume different positions and as far as I can see the only way to access the interior in to detached the roof which at the first glance looks easy!

Globally, this set looks absolutely a must, especially if like these type of races. With an extraordinary design, the set can also incorporate other smaller sets and make an unforgettable speed champions race. There is no information about its real size however I would say that it will bring something around the three hundred, perhaps a bit less! Enjoy the pics!