The Haunted Lighthouse is a new Scooby Doo set that will hit stores in a couple of months. And it’s definitely a pretty nice box featuring a lighthouse built over an island, a small green boat, five mini-figures (Scooby-Doo, Shaggy, Daphne, Swamp Monster and Lighthouse Keeper) and a considerable number of additional accessories such as a delicious burger for Scooby, a treasure chest, two golden keys and even a small map.

I like this new Haunted Lighthouse. It’s filed with tricks and features everywhere and it’s built over an interesting island with three different levels. Best of all, is absolutely the big skull on the left side which is perfectly sculpted and hides a small cave that is easily accessible just by opening the skull to the right side.

On the right, there is a small harbor, perfect for the green boat, and right on the middle, in the second level, we have the lighthouse with three floors. The first, the entry, looks quite simple and through the available images I would say that the interior is a bit naked. On the outside there’s a small ladder and a printed piece mentioning “keep out” that gives access to the first floor.

Once here, the space looks similar to the ground floor with the difference that there is a door with bars and inside we can also see a big spider web that suggests a sort of cell. Finally on top, the big light, surrounded by glass is also flanked by a black barrier where the Lighthouse Keeper will scary Scooby doo and its friends. The light tower can also be moved in order to hide the two golden keys.

The green boat isn’t big, and has stickers almost everywhere. Daphne has a usual steering wheel to handle the boat and just at her front an aerodynamic windshield. At the back, there is perhaps the best feature, namely the powerful engine that allows Shaggy to ski on high speed. 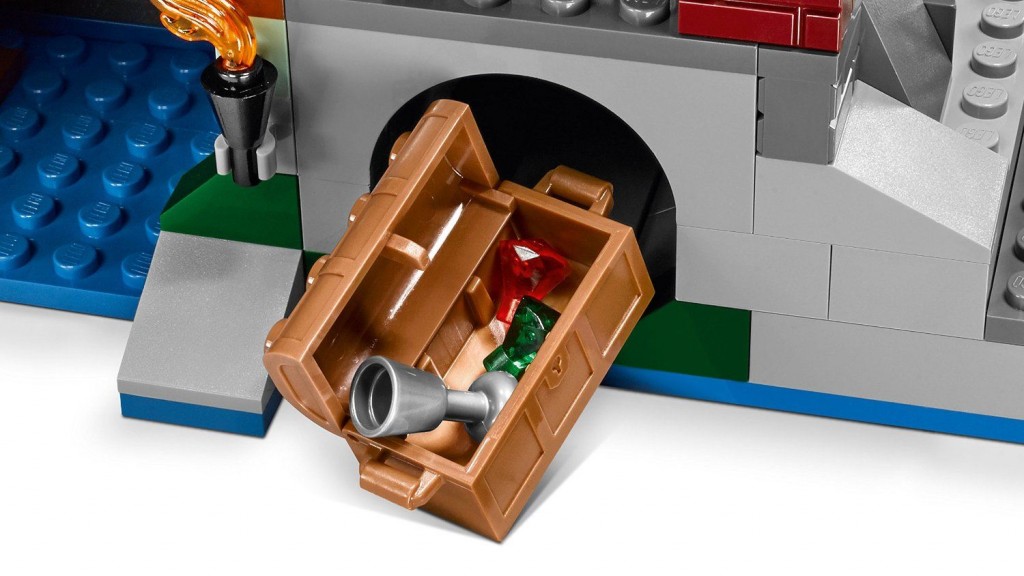 Globally it looks a pretty interesting deal. The lighthouse looks fantastic specially because it’s built upon an island with a considerable size and the mini-figures are once again a nice addition to any collection. The set will be available next August and should retail around the fifty dollars. Enjoy the gallery: