The Mystery Machine is a new Scooby Doo set that will be released next august. It has exactly three hundred and one pieces and features the most known van of Scooby Doo cartoons, called the mystery machine, four mini-figures (Scooby-Doo, Shaggy, Fred and Zombie) with a couple of accessories that include a big sandwich for Scooby, a newspaper and a glass, and an haunted tree.

The first look takes me to hours and hours of good time passed in front of the TV, watching Scooby and its friends. The Van is definitely pretty well recreated and it brings a lot of stuff to play with.

The color scheme couldn’t be better mixing blue and green with a bunch of nice stickers (yes, this I must confess that this time I like it!). The cockpit at the front has a connection to the back and is considerably large, having space for Shaggy and a friend without crossing their arms. At the front, the windshield is also pretty unusual (I think that it’s a new piece) having some extended glass on the edges. The roof can also be easily removable providing a better access to the cockpit’s interior. 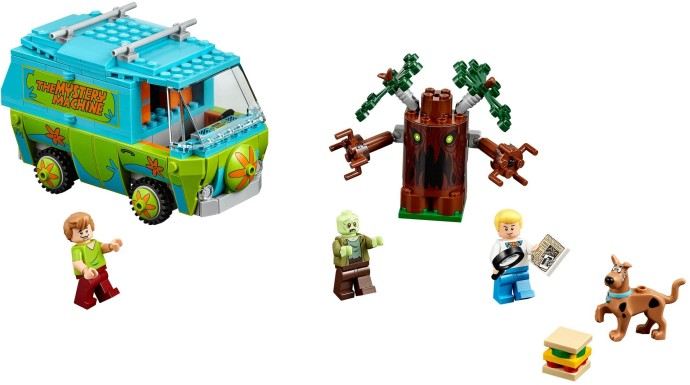 The back compartment opens widely just like for instance the caravans and shows space enough for Scooby doo, and a bunch of nice stuff to enjoy and play with, such as a couple of computers, lots of crime material on the walls, a digital camera and finally a big delicious sandwich for Scooby.

The Haunted three is built upon a 4×4 plate and in fact it is a robotic tree, having at the back a small control panel. The cylinder piece at the front has a nice scary sticker and the two big arms as well as the couple of branches can also easily move of position, frightening the three crazy guys. 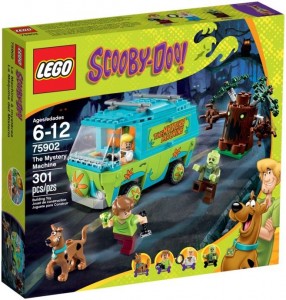 The four new mini-figures seem extremely accurate and are surely a must to add to my collection. Overall the set will definitely be a summer acquisition and the thirty dollars are already reserved. The van is pretty well detailed, the playability is high and the value for money is even better.