Fifty years separate these two models, but the beauty and the passion are definitely the same. This new Speed Champions set, 2016 Ford GT & 1966 Ford GT40, shows three hundred and sixty six pieces and definitely brings a lot to enjoy and play.

The set, as you can see through the pictures features the same car, the Ford GT40, but in different versions, nowadays model (2016) and the sixties racing version, three mini-figures (a couple of pilots for the cars and the finish line judge) with a few accessories, and a small podium with a big trophy for the winner.

Honestly, I don’t know which one is my favorite. Being so different, they both have a great design. The 66’ Black version shows square lines but the long aerodynamic front where the lights are cleverly installed is absolutely beautiful. The lowered cockpit has only the sufficient space for the pilot and the steering wheel and behind them, the powerful engine with two huge exhauster pipes shows that the car surely wants to win the race. The stickers with the number two and the golden rims are a nice added value to the car and gladly break the black monotony of the model. 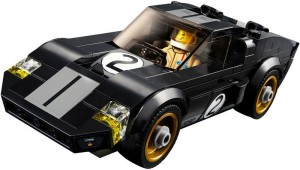 Having a look at the 2016 car, the differences are definitely big and as the technology wasn’t enough, the color scheme is also very different, mixing blue and red together with plenty of small stickers. The front isn’t so long but shows an additional aileron that will be an extra help to keep the high speed car on track.

The cockpit is as short as the black model but instead of the 66 version, the windshield and the roof are a single piece which seems to be better when we want to put the pilot inside. The wheels are obviously completely different and at the back, the engine as well as the pipes is a bit more discrete. Instead, the big aileron receiver all the beauty credits.

Finally, a couple of words for the small podium. Three small steps, a wall with a Ford Logo and a trophy seems quite short, but definitely adds some reality to the race, allowing the pilots to celebrate. Overall, for around thirty dollars (good price!!) we can’t ask for more. The cars, as well as the mini-figures, are excellent and the playability has everything to be in a high level.