The Ford F-150 Raptor & Ford Model A Hot Rod is a Speed Champions set that has recently been released. This big set has six hundred and sixty four pieces and features an awesome off road F150 Raptor with a trailer, a Hot Rod racing car, racing lights, a pit with lots of tool and accessories that include a spare engine and four mini-figures (a pilot for the Hot Rod, The F-150 driver, a mechanic and the finish line guy).

Despite being a racing set, I think the off Road Ford claims all the attention. With a nice color, its special suspension, made with some technique bricks, moves easily up and down and allows it to surpass anything which is really cool in terms of fun and playability.

The engine, at the front, looks big and the several stickers on the grid and lights are this time a good addition to the car. The cockpit has no doors (the roof detaches easily to access the interior) and in the bottom, the chassis is reinforced with some extra protections. Inside, there is the usual, a seat for the driver and the steering wheel. The trunk at the back looks big and has a small lowered part what gives an extra space to transport a few extra things.

The trailer is a nice brick built model and has all the necessary parts to transport safely the racing car. The attaching pieces are the same but besides the tipper parts at the back, it features also eights chocks, two for each wheel, in order to block the Hot Rod, whenever they’re on movement.

Talking about the hot rod, it is absolutely very funny, and powerful, at least looking to the big engine with the exhaustion pipes right at the front. And if it wasn’t enough, the stickers with flames in the black doors, they simply do the rest. The front axle is considerably smaller than the back one which gives the car a inclined look. The cockpit, on the other hand, isn’t very big and the visibility either, because besides the small windshield the pilot has also to deal with the top of the engine.

The panel with the lights looks also really nice (the lights sequence is definitely detailed and realistic) and I think that is an always useful element, not only to this set but most of all, in other occasions.  Finally the pit, that has podium in the back, has two different parts and both have plenty of tools and accessories for the mechanics. The podium is very simple and besides the traditional chess wall, has also a small trophy for the winner. 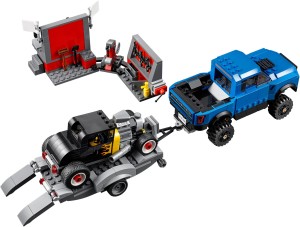 Overall this is a must for the speed champion’s fans. The set shows a lot of playability and two awesome vehicles. The mini-figures aren’t spectacular but are absolutely in line with the rest of the set. The Ford F-150 Raptor & Ford Model A Hot Rod is already available and retails with a price around the seventy dollars.