Forty seven years separate these two Chevrolet cars, but they’re definitely a great combination, full of power, beauty and playability! This new speed champions set features besides the two Chevrolet Camaro (a 1969 and 2016 models), the start/finish lights structure, a small podium with a trophy and three mini-figures (the two pilots and the race official) and multiple accessories that includes spare rims for the cars.

The 1969 model is absolutely my favorite! With an awesome black and white color scheme, it shows a long engine hood with a big air entrance. The grid and the lights, at the front, are represented by a sticker but this time the final result looks great, looking quite close to reality.

The wheel axles have different sizes and the cockpit which has no kind of doors, has only the necessary space for the red seat, the pilot and the steering wheel and the roof can be easily detached in order to access the interior. Finally, there isn’t unfortunately a clear picture of the back, but the small aileron keeps the same black lists, which is pretty balanced in terms of design.

The red 2016 Camaro has a completely different aesthetic but honestly the front isn’t the best. The car is all built with red bricks and the wheels are perhaps the most beautiful part of the car. Just like the 69 model, the car has no doors and the windshield goes along the entire cockpit. Inside, the pilot has a decent seat and the usual steering wheel. The back isn’t very clear, through the available images, but it’s surely built with plenty of small pieces which is always pleasant in terms of shapes and detail.

The star/finish line is a great element in terms of fun and playability. However in my opinion the lights should be on top instead of being so close to the racing cars. The structure uses a long technic piece and the lights feature a nice turning red to green mechanism. 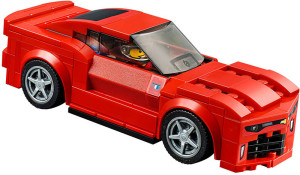 Overall, it’s absolutely a pretty interesting set with three great elements in terms of playability. The cars, despite a few unpleasant details, looks really cool, and the mini-figures are surely a great addition to any collection. This new Speed Champions set is already available on stores and retails around the thirty five dollars which seems a great deal, according that the set has more than four hundred pieces. Enjoy it!