Angry Birds are definitely not my truly Lego concept but I must admit that these sets are funny and with some interesting features to enjoy. One good example is this new Piggy Plane Attack that with hundred and sixty eight pieces features an airplane with unusual and colored details, a nice catapult and two figures (red and Pilot Pig) with additional accessories.

The airplane is based on a vintage model but it shows a base and a landing gear all built with technic pieces which isn’t very usual especially in a small model like this. The propeller and the engine at the front look also cute because they’re inside what it seems a half barrel. Just attached to it, is also possible to see the cylinders and also a big technic arm that can assume different positions.

The wings aren’t very big but surely show a nice color scheme mixing red and white. On the edges, they feature also some clips that hold a couple of balloons.  On top, the plane has also a couple of flick fire missiles, possibly ready to shoot against Red and the catapult. Behind the engine, Pilot Pig has also a nice pilot position and four studs with eggs to be launched against Red.

The tail hasn’t any tricky feature for Red, but it’s built with several pieces of different colors that combine pretty well the rest of the plane. The catapult is a nice addition in terms of playability and fun. With a long range, it’s has the capability to throw red through the air and hit the airplane. 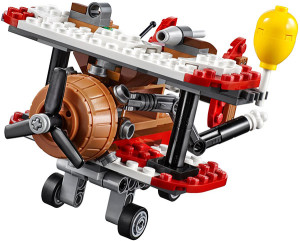 In terms of the two new figures, they’re we’re already known for a long time but they’re surely quite well accurate, especially in terms of printing details. This new Angry Birds set is already available on retail with a price around the twenty dollars!