The Arrowhead is a great star Wars set with more than seven hundred pieces that includes an awesome long spaceship with plenty of nice details, a tiny yellow flying cart and five mini-figures with assorted weapons and accessories: Zander, Quarrie, Kordi, RO-GR   and finally a Stormtrooper.

Built over a structure of technic bricks, the space ship shows at the front the main feature which gives it the name: a arrowhead or if you prefer a hammer that easily goes up and down and smashes the enemy.

The big cockpit is also nearby and once open, it is possible to observe a big compartment, capable of transport three or four mini-figures. The guys are definitely very well protected because over such a large space, the only glass that exists is the tiny windshield at the front.

Right behind it there a transparent blue dome with a crystal, supposedly a sort of power source element for the ship. In terms of weapons the choice is not much, only two spring loaded shooters and a few pistols for the figures. At the back the engines with four blue exhausters give the ship the appropriate power to fly. 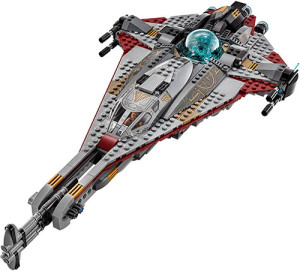 Overall, it’s absolutely a great set, most of all because of its beauty. The playability isn’t much but the ship shows some pretty nice details and the mini-figures as always are beautifully accurate. The set already available on stores retails around the ninety dollars. Enjoy the pictures!