The Resistance Transport Pod is a new star Wars Last Jedi set that has been recently released. It seems to be smaller than the piece count suggests, showing almost three hundred pieces which are enough for the space craft and for two mini-figures (Rose and Finn) and BB8 with several accessories.

Definitely it’s not the most exciting set of this wave but it surely has some nice details and a good dose of playability. With a fat structure and no kind of wings, this pod has however a big cockpit with a large yellow windshield where two figures can be easily transported.

Inside, there is space for two seats and some handlers for the pilot. Aside there are also a couple of clips where weapons can be easily stored. Outside there isn’t any significant features but a couple of weapons on each side can be found as well as the exhausters, at the back. The orange stabilizer (and also the windshield) is also a positive point, due to the fact that it breaks the grey trend of the ship. 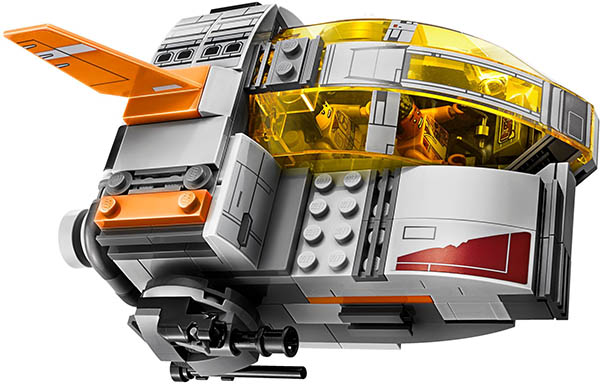 Globally it’s a pretty interesting set. The space ship is not very bit but looks sturdy and has a good handling which is good when it’s time to play with it. The figures aren’t very enthusiastic but as always seem pretty accurate. The set is already on retail with a price around the thirty dollars. Enjoy it!