Luke’s Landspeeder is a new Star Wars set that shortly will hit stores. And it definitely looks a nice entry space ship with some interesting details to enjoy featuring also, besides the landspeeder four mini-figures (Ben Kanobi, Luke Skywalker, C-3PO and Tusken Raider) with assorted weapons.

The space Ship shows a great color scheme, mixing light orange with purple and looks considerably large, according to its overall size. The front is long with curved shapes and, in the middle, the cockpit shows some nice features to play with: two seats with a big control panel between them, a steering wheel and some handlers to maneuver the ship and a round and aerodynamic windshield.

At the back, the three engines give the machine a terrific look and ensure the appropriate power when it’s time to fly. All of them have stickers and, not being a fan of them, I must agree that this time they seem to give a more realistic look. 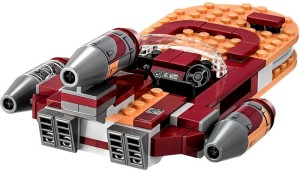 In terms of mini-figures, Tusken Raider is perhaps the most unusual guy, but all of them seem pretty accurate. Overall for around twenty dollars, I think that is surely a pretty interesting deal not only if we attempt to its elements but most of all if we think about its playability. January, in stores, enjoy the pictures! 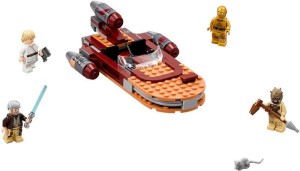