The figures are also another reason to achieve the set. With nice detailed and colored suits they show also, each one of them, a small stud shooter which is interesting if we attempt to the playability! Personally, 4-LOM with its bug head is my favorite from the four. 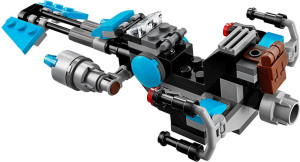 Globally, for around fifteen dollars, that’s a nice set especially if your intention is to get some extra mini-figures. The playability is in high levels and the price looks fair according to the piece count. Enjoy it!