The Rebel Alliance Battle Pack is one of the new Star Wars Battle pack sets that will be available on stores in the next couple of weeks. It has around hundred pieces and features a speeder bike and four rebel troopers (a couple of humans, Duros and Rodian) with plenty of assorted weapons.

This kind of sets might not be the most enthusiastic in terms of playability and beauty but I always find them useful, allowing getting some really nice mini-figures (and most of the times an extra vehicle) without having to spend too much money.

And if we take a look at the speeder, the value for money of this set surely increases. It is not very big but it definitely brings a few interesting features to play with. The cockpit in the center shows a couple of handlers and a small panel and next to them, on the right side, the pilot has also a stud shooter ready to fire.

The vehicle isn’t much different from many others, in terms of design and color, but it shows an additional and unusual element: an extra seat right behind the pilot with a second stud shooter, able to fire to almost every possible direction. 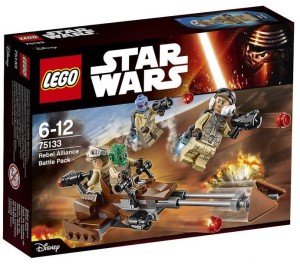 The mini-figures are as always nicely accurate, showing detailed uniforms and weapons for everyone. Overall, this small set brings plenty of action and playability and the only con for me is probably the price which should be around the fifteen dollars, a bit overpriced if we attempt to its piece count. Enjoy it!