The First Order Transporter is another Star Wars set that was officially unveiled yesterday. Belonging to the Force Awakens wave of sets, it has almost eight hundred pieces and features a big transporter with lots of elements to enjoy and seven mini-figures with assorted weapons (a couple of resistant soldiers, two first order flametroopers, two first order stormtroopers and captain Phasma).

The green shades and the straight lines don’t affect its beauty or even its playability. The transport is reasonably tall and has a big ramp at the front for the army to get in into the compartment. The gate can also be easily lowered just by turning the gear, at the back. If you prefer, there is also the possibility of removing the roof and have total access to the interior.

On the top, the troopers have also a small cabin, to pilot cabin with space for a soldier. Next to it, there’s a small door with an additional seat to control a double stud shooter which seems to rotate easily. On the edges, and to complement the fire power, there are also two spring loaded shooters which is excellent in terms of playability.

Inside the transporter, the space is more than enough for four soldiers fully armed and with a bit of careful it is possible to load a couple of more. The side panels are extremely detailed with lights and sharp pieces and at the back, the big engines give this huge machine the appropriate power. I especially enjoy the blue pieces on this part! 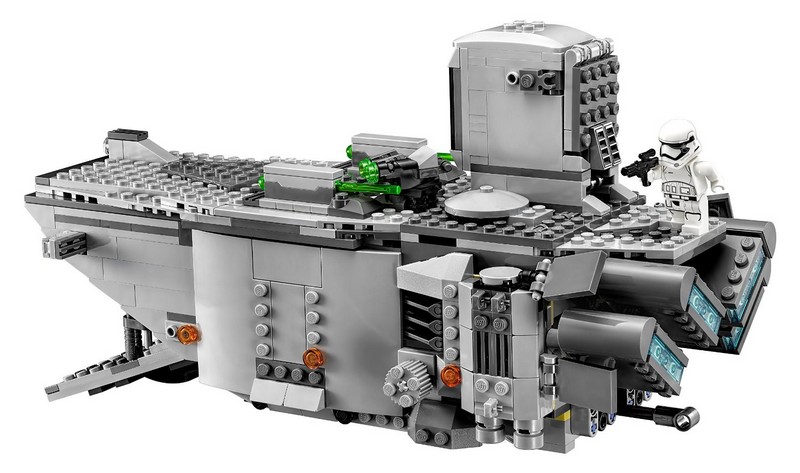 The mini-figures are pretty nice once again and bring a huge arsenal of weapons: a silver-look blaster, a couple of blasters, a titanium-look blaster and finally two flamethrowers. That’s definitely a lot. Globally, this looks a huge set. The playability is on a high level and just like most part of this wave (should I say all?) the big con is the price that should be around the ninety dollars in US and hundred Euros in Europe.