The First Order Snowspeeder is another Star Wars: The Force awakens set that has been officially released last week. This medium size space ship has four hundred and forty three pieces and features besides the space ship, three mini-figures (a couple of first order snow troopers and their officer – which is identified by its red shoulder) and plenty of extra green ammunitions.

At the first glance and without putting my hands on it, I must say that I especially like it. It’s mostly grey, with lots of details and small piece everywhere (one of the reasons that the piece count is so high), it looks quite sturdy and definitely brings a lot of nice features to enjoy.

The front is completely dominated by a huge cannon that includes a small stud shooter on top. It’s not rotatable, by it can easily move up and down. Inside, there is lots of available space, not only for the troopers but also for three boxes that carry the extra ammunitions. In the center, just behind it, the main cockpit has lots of space for the pilot and a big control panel just at his front.

The wings are totally filled by the huge rotatable blasters. These two cannons contain six green studs each and can be easily triggered just by rotating the small knob in its back. Below this structure, the space ship has three transparent wheels, almost hidden, that at the first look seem perfect in its purpose. All around the ship, it is possible to see multiple small pieces with stickers, except at the back where the big engines are placed. 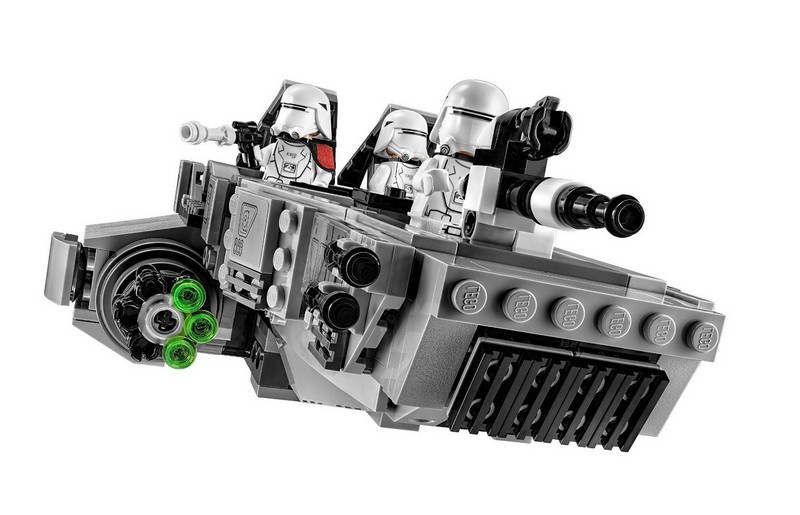 Overall, this new space ship surely looks pretty nice. It’s reasonably big, it’s sturdy and shows some nice elements to enjoy namely the side cannons. The mini-figures, as expected, have white suits with nice painted details and you we think about its potential in terms of playability and interaction with other sets then I’m sure that this is absolutely a must. The Snowspeeder is already available on retail with a price around the forty dollars. Enjoy!