Ezra’s Speeder Bike is a 2015 Star Wars set that has recently hit stores. The speeders are reasonably large and built with small pieces which explain the total number of bricks: two hundred and fifty three. Besides the two vehicles, the set brings also three mini-figures (Ezra Bridger, Sabine Wren and a Stormtrooper) all of them with the respective weapons.

The speeders, as you can see and the pictures seem quite similar being the major difference for obvious reasons its color scheme. The front that contains a couple of movable vanes is also adjustable in length mostly thanks to the two retractable pieces that join the nose with the cockpit.

This one, in both vehicles is protected with a round dish at its front and in terms of features it brings not only a good piloting position but also a couple of the new stud shooters just beneath the pilot. Behind, there is a small clip to store the pilot’s weapons and just at the back the engine can be also be retracted depending on the space craft is on flight or not.

In terms of color I must say that both look really nice and I especially enjoy the dark green of Ezra’s speeder mixed with the orange. The new stud shooters are also an added value in terms of playability because they fire powerfully the studs with a considerable aim. The mini-figures seem pretty nice and I’m sure that the fans received quite well Sabine Wren that was being asked for quite a while. 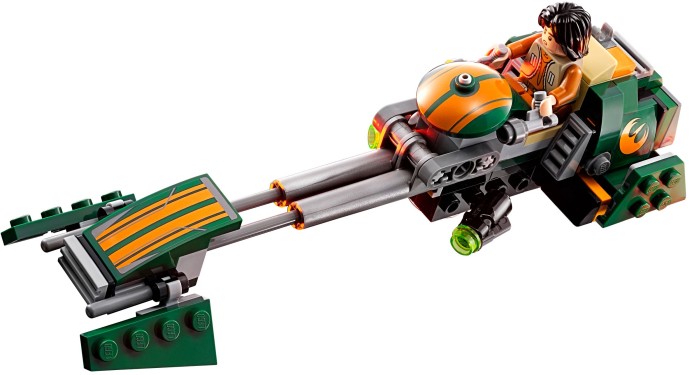 Overall, this seem a must have set. The vehicles looks really cool and with a lot of interesting elements, the figures are also pretty accurate and the new Sabine Wren is until the moment an exclusive figure and I guess that the price, around twenty five dollars, won’t certainly be a problem.