The Geonosis Troopers is a small star wars set that will be available on stores next month. With only hundred and five pieces this entry line box presents a very interesting walker with a couple of features and four Geonosis troopers with assorted weapons, slightly different from each others.

The walker is obviously quite simple to build, showing a nice color scheme, mixing black, grey and brown. The long feet as usual can move forwards and backwards and on top, the small platform has space for a couple of soldiers and for a small seat for the pilot. The couple of side flaps can also move widely protecting the troopers from an eventual attack.

Below this cockpit, the walker brings a huge cannon with a new shoot technology that will surely fire powerfully the six blue ammunitions. Triggered through the back, the rotating mechanism allows the six little pieces to be fire independently at the same time that the cannon rotate.

The mini-figures wear light brown uniforms with plenty of detailed printings all over their bodies. Two of them as I mentioned before are slightly different from the others in two details: the helmet and the torso printing that respecting the same color scheme have, however, a few additional elements such as the belt across the chest. 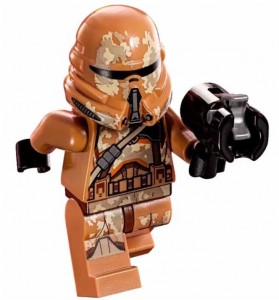 Overall this set is absolutely a must. Four mini-figures and a small walker with a new rotating cannon look definitely a good deal especially if we attempt that it will probably cost around ten dollars. Enjoy the gallery!