One of the most iconic Starwars sets has been officially unveiled. The new sandcrawler that will start retailing in the 2014 second half will feature the gigantic vehicle, a couple of additional small elements and seven mini-figures: Uncle Owen, Luke Skywalker, C-3PO and 4 Jawa, a R2-D2, a Gonk Droid, R5-D4 and a Treadwell Droid.

Built mostly with a great variety of brown shades, the structure, especially inside, has plenty of technic elements which will be used on several features, namely the couple of working cranes, the eight steering tracks which are the base of the entire Crawler or even the loading ramp, placed at the back.

The interior space looks big, very big and at the same time quite complex with at least three different sections filled with a bunch of different stuff to play with and enjoy. And if it wasn’t enough all this is easily accessed because the several plates, which compose the roof, are easily detached which increases all the playability.

For me, the most impressive part is absolutely the big loading ramp, built with several plates of different colors and a complex technic structure which can be seen in the interior that compose the big working crane. The winch seems to have a couple of knobs for all the maneuvers and is easily retracted when it’s time to lift off. 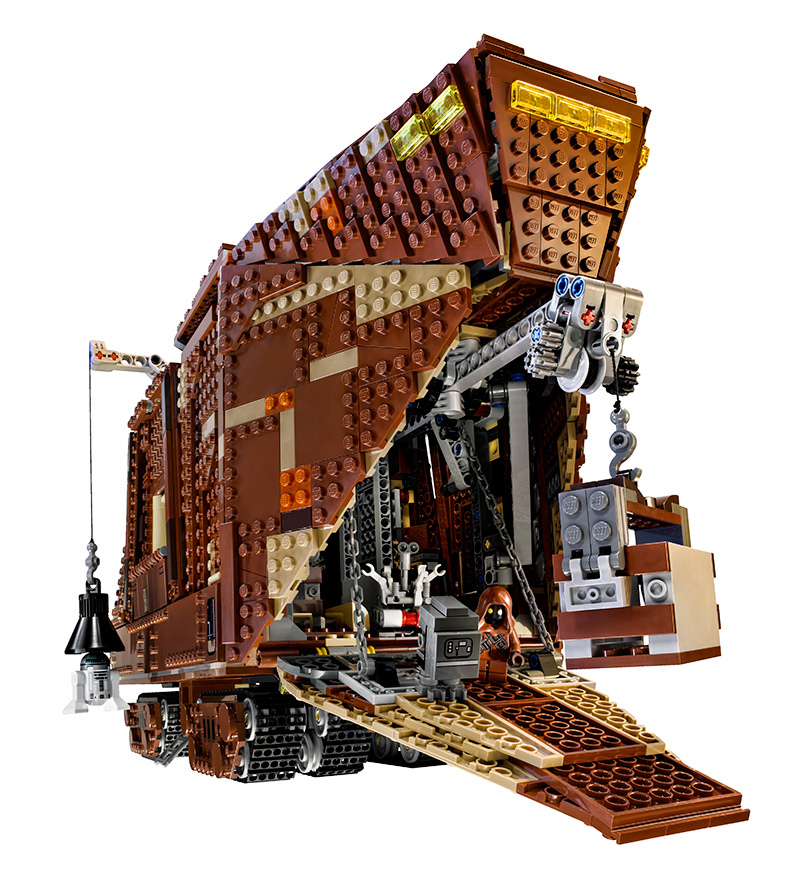 At the front the cockpit (I think that is more a huge control room) has space for the three Jawas and the respective control panels and seats, a big flat screen and some additional space for more figures. Once again this is easily accessed just by opening the roof that this time is a really big brown door.

On both sides, there are once again, plenty of really nice details and features such as the smaller crane, the refueling gauge, and several small compartments. Having a look at the mini-figures, they aren’t properly new but I guess that, as usual, they look pretty accurate and some of them bring some really nice weapons. 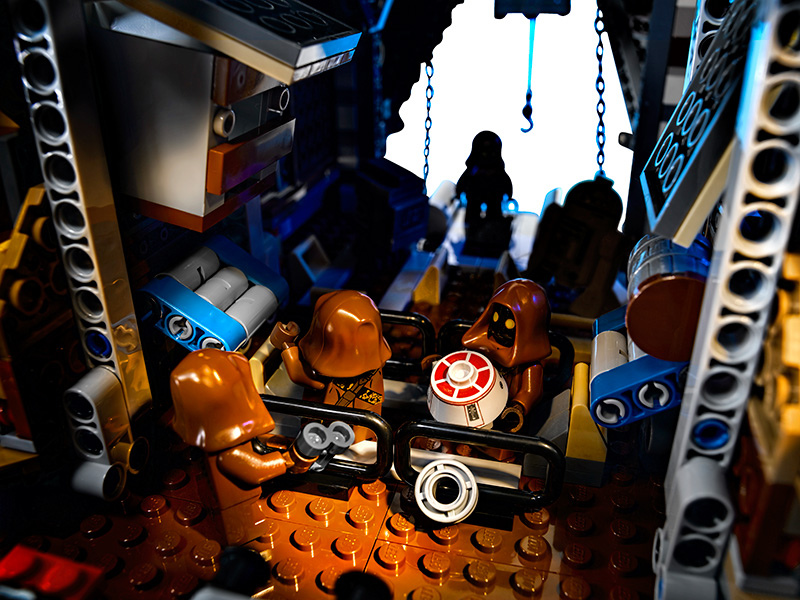 Overall, there is no doubt that this is a must for the starwars fans. The sandcralwer impresses mostly for three reasons: first, its beauty and color combination. Second, its size, it measures almost half a meter Third, perhaps the most important, all the impressive quantity of features to enjoy. The price won’t be cheap, around three hundred dollars, but I guess that everybody was already expecting that, after all it brings more than three thousand pieces. Have a look at the official press release and the galley below:

Collect a true icon of the classic Star Wars™ universe – the mighty Sandcrawler™!

Recreate unforgettable scenes from Star Wars: Episode IV A New Hope with this amazing LEGO® incarnation of the Jawas’ desert-going vehicle, the Sandcrawler™. Turn the knob at the rear and steer the Sandcrawler into position, lower the front ramp and offload the droids using the 2 working cranes. Luke Skywalker™ and his Uncle, Owen Lars, are sure to be impressed with the selection on offer: there’s R2-D2, an R1-series Droid, an R2 unit, R5-D4™, a Treadwell Droid™, Gonk Droid™ and even C-3PO™. When the sale is complete, lift the side panels and top to reveal more great features inside, like the engine, storage bay, cockpit and more. There’s even a speeder bike for when the Jawas need to venture outside. Includes 7 minifigures: Luke Skywalker™, Uncle Owen, C-3PO™ and 4 Jawas™, plus R2-D2™, R2 unit, an R1-series Droid™, Gonk Droid™, R5-D4™ and a Treadwell Droid™.

• Weapons include a lightsaber for Luke Skywalker™

• Sell droids to Luke and his Uncle

• Pretend to suck R2-D2™ up into the Sandcrawler™ – just like in the movie!

• Own your own iconic vehicle from the classic Star Wars™ universe