The new Star Wars MTT , Multi-Troop Transport, has been unveiled. It seems that the picture has been taken in a retail store which ends to be a bit strange because until the moment, there were no kind of official information or pictures from Lego.

The set will retail around the hundred dollars which is enough, in my opinion to anticipate a smaller version of this huge star wars vehicle, comparing to the previous model, the 7662 – Trade Federation MTT that had something around a thousand and three hundred pieces. 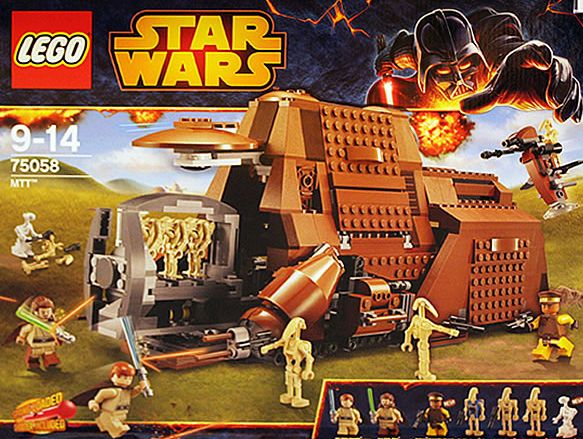 As you possible remember, the Multi-Troop Transport (MTT) is a heavy repulsorlift vehicle used by both the Trade Federation and the Confederacy of Independent Systems to transport B1 battle droids and Droidekas prior to and during the Clone Wars. So be ready for a heavy duty vehicle with a considerable size and plenty of space in its interior.

In terms of mini-figures, looking at the set box, it’s possible to see seven (Qui-Gon Jinn , Obi-Wan Kenobi, a Naboo Royal Security Guard, a Battle Droid Pilot, two Battle Droids, and a PK-4 Worker Droid). However, at the front, inside the grey compartment, it is also possible to see at least three extra droids.

There are weapons everywhere for all the guys, and as it concerns to the MMT, it brings a few laser cannons at the front, as well as the new spring loaded shooter and I’m sure that we’ll see a lot more in the official pictures. Just like the Sand Crawler, this guy is heavily armored using big brown bricks on both sides.

If the main features are kept, there will be side gates on both sides, a big back door and the roof will also be removable for a better access to its interior. Finally there is also a small Droid Ship with the same color scheme of the big vehicle. There is no official information at the moment but expect to see it soon on stores with the rest of the Summer line.