The Snowpeeder is an update set, from a quite well known model that will hit stores next August. The new Snowspeeder looks at the first glance slightly bigger than the previous version bringing also three mini-figures (Luke Skywalker, Dak Ralter and a Snow Trooper) among a total of almost two hundred and eighty pieces.

This new airship brings some really nice features to play with. First of all, below the wings there is a new stud blaster gun with what it seems to be a sort of harpoon that can be easily shot. Once fired, the small winch is easily wound again, just by moving a usual knob, placed at the back.

Besides it, on each one of the wings, there also a traditional flick fire missiles ready to hit the enemy anytime it’s triggered. Just in the middle there is perhaps the best pat, at least for me. The Cockpit is pretty well designed and quite close to the real ones. As you can see it opens widely and has more than enough space for Luke and all the controllers.

Just behind it there is also a small compartment that allows among other things to store the pilots’ weapons. Finally another great detail that caught my attention is the couple of flaps mounted, at the back, just before the engines! They assume several angles depending if the ship is flying or not. 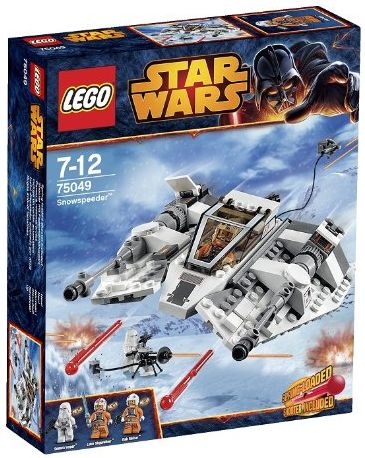 The figures aren’t particularly new, however and as usual, they seem quite detailed and with assorted weapons. Overall, for thirty dollars, the new Snowspeeder seems a pretty nice space ship, full armed and with a couple of really nice details. The price isn’t the best but the new dual spring-loaded shooters will ensure to compensate that.