A new star wars spacecraft has just arrived to stores directly from the season five of Clone Wars. The new Coruscant Police Gunship features, among a total of four hundred and eighty one pieces, a big spaceship capable of transporting multiple troopers and four mini-figures: two Shock troopers, Anakin Skywalker and Ahsoka.

Besides the great aesthetic recreation, there are two features that quickly caught my attention: the bunch of different weapons that this ship brings and the huge interior space that allows transporting a lot of soldiers, more than the couple that came with the set, and the big compartment to store their multiple tools.

As you can see through the pictures, this transporter has at the front an unusual cockpit with a big red windshield and space for two guys. At the same time it is simultaneously the front sliding gate that permits the access to the interior. Inside it’s up to your decision but at the first glance I would say that at least six troopers can be easily transported.

Just behind it, another big compartment accessed through a smaller side door is ideal to store all the troopers’ weapons but in case of need it can also carry a couple of additional soldiers. Definitely and according to its medium size that is absolutely one of the greatest ships in terms of inside space which is surely great in terms of playability. 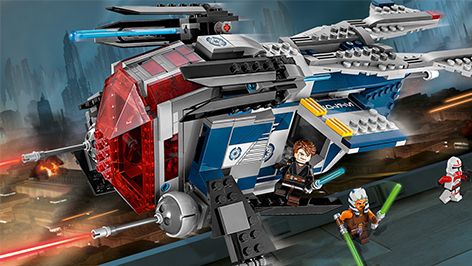 Having a lot at the assorted weapons that the set brings, this time we can identify two different types: the ones that came with the soldiers and those that are built along the ship. The four guys are presented with three light sabers and a couple of blaster and among the ship we can easily see at the front two new powerful spring loaded shooters that easily move in all directions, allowing shooting in almost every possible angle.

Finally and if we look at the tail or the landing gear I guess that there isn’t much to say with the exception that are perfectly recreated and easily transport us to the time of those series episodes. Overall fifty dollars don’t seem much for this nice space-ship. The playability is above the usual in this theme and the four mini-figures are once again perfectly accurate. Enjoy the pictures!