The V-Wing Starfighter is a new StarWars set that has been released in the beginning of the year. With a traditional color scheme, dark red and grey, it features a really nice middle size space ship and two new mini-figures (a red Astromech Droid and the V-Wing Pilot that brings a black pistol).

Despite being just another Starfighter, this space ship has a few interesting features to play with. The nose, just at the front of the cockpit uses long pieces and a couple of stickers which at the first glace aren’t bad at all. Just below it, a single support ensures the correct balance for the rest of the landing gear and of course the entire ship.

The cockpit is quite long with lots of space in the interior which seem more than enough for the pilot and its handlers. The windshield is also very big and opens around ninety degrees which is great when it’s time to seat the pilot. Just behind it, and a little bit raised, there is also space for the Astrimech Droid. 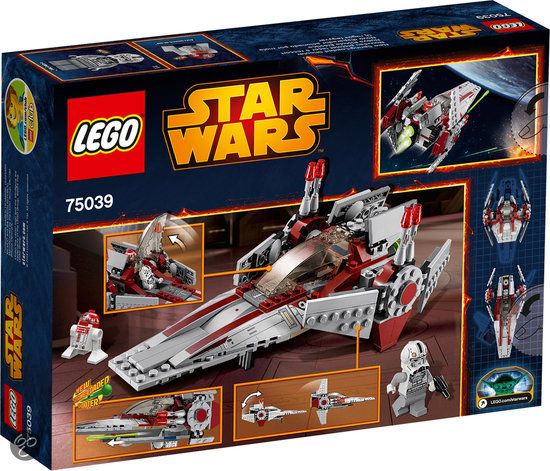 The wings are in my opinion the best part, not only because of their beauty but most of all because its rotating mechanism allows two modes: The flying and the landing mode. All that is required is turning them a little bit and that’s it. When in flying mode, four flick fire missiles get available and ready to shoot against anything that puts ahead! But as it wasn’t enough, two new spring loaded shooters, placed just below the cockpit are also a really nice element and an extra weapon to blast anything that comes around, namely on planet Mustafar. 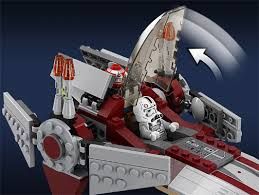 Overall, it definitely looks a really nice set. The space ship is rather pretty, with plenty of interesting features and the two new mini-figures are also quite detailed. According to the two hundred pieces that the set has, the twenty five dollars that it cost seem a bit overpriced but I think that the V Wing worth it. Enjoy the pictures!