Nine mini-figures and a bunch of spaceships and vehicles’ miniatures is what we can expect of the new 2013 star wars advent calendar. Basically it is more of the same if we compare it with other year’s releases.

With a total of two hundred and fifty four pieces, it will bring several star wars characters namely a Rebel Commando, a Battle Droid and a Clone Trooper, a Geonosian Pilot, a Scout Trooper, Jango Fett with a Santa suite and finally Boba Fett in a total of nine mini-figures to add to collection.

In terms of microscopic ships there are plenty to choose from since the AT-TE or the Republic Gun Ship passing through the 2011 Geonosian Starfighter or even the new A-wing starfighter. Besides the ships there is also a nice gray rack with at least three black pistols which is always a nice complement to the other regular sets.

Overall this advent calendar set is not particularly new or innovative, but I guess that this is a point that repeats over the years. The mini-figures are definitely very nice especially the rebel commando and Jango Fett, but the price could be a bit more attractive. 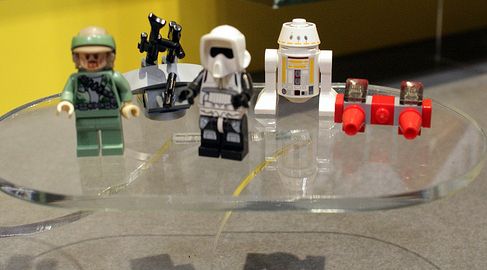 Forty dollars, is the expected retail price which is not only a bit heavy when compared for instance to the other advent calendar but also if we take a look to the number of pieces that it brings and think about the theme’s average price per piece. Please have a look at some additional pictures: