It’s was almost certain that the second Simpsons’ Set would be on stores in the first semester and today Lego has gladly conformed it. The new Kwik e-Mart set has been officially revealed, it will be slightly smaller than the Simpsons House, and will be available next May with a retail price around the two hundred bucks.

With exactly two thousand and hundred and seventy nice pieces, the set brings, besides the convenience store which is extremely detailed with lots of different colors everywhere, a police car and six mini-figures: Homer Simpson, Bart Simpson, Marge Simpson, Apu Nahasapeemapetilon, Chief Wiggum and Snake, all of them with different accessories.

At the first look from the outside, we can see all the major colors perfectly reproduced just like in the cartoons. To the dark yellow wall and the brown roof with a big kwik emarket outdoor joins a front wall filled with plenty of glass that includes several windows and a big door just in the middle allowing seeing some of the endless details of the interior.

Aside the glass, there are two phone cabins, a grid to park the bikes and an additional compartment for the big trash cans. To access the interior there are two possible ways: By removing the roof which as you can see through the images, features some nice details such as the conditioning air or even what it looks a small garden, or adding a second step, opening the back wall just right in the middle. 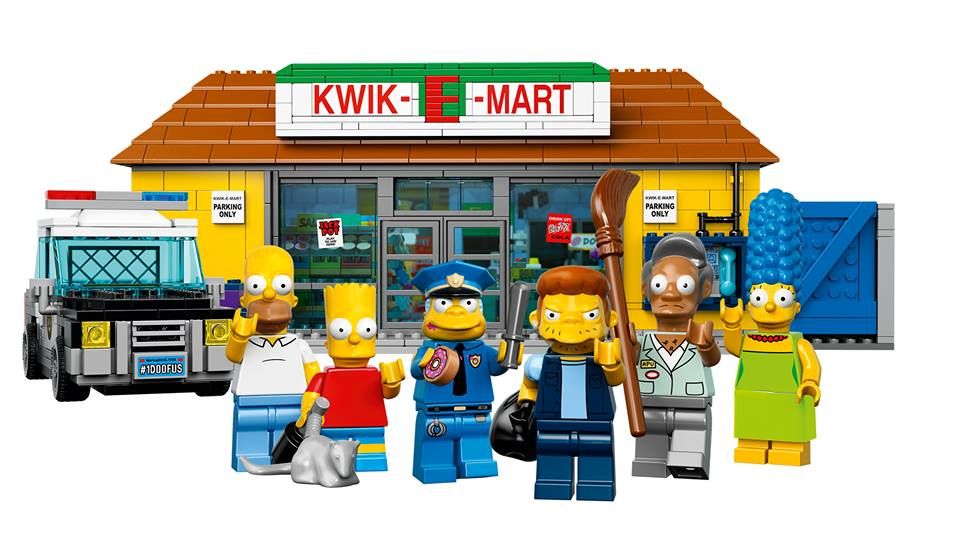 Once opened, the building shows a lot of pretty nice details, featuring a huge potential in terms of playability. The small supermarket is definitely awesome, showing a lot of different shelves with food and assorted goods, refrigerators all along the walls, an ice cream machine, a small stand with papers and books, an ATM with a surveillance camera, coffee and drinks machines and even a small storage to put the power sauce boxes. Besides this list, there are certainly many more details that are impossible to mention with putting the hands on the store.

Returning to the outside, the police vehicle despite not being very cute, is however and once again perfectly recreated. It’s reasonably big, it uses the traditional colors scheme of the American police vehicles and shows in the interior a lot of space for the officer and for the potential arrested guys. I especially enjoyed the fact of being built with plenty of little pieces, which is surely interesting when it’s time to build this secondary element. 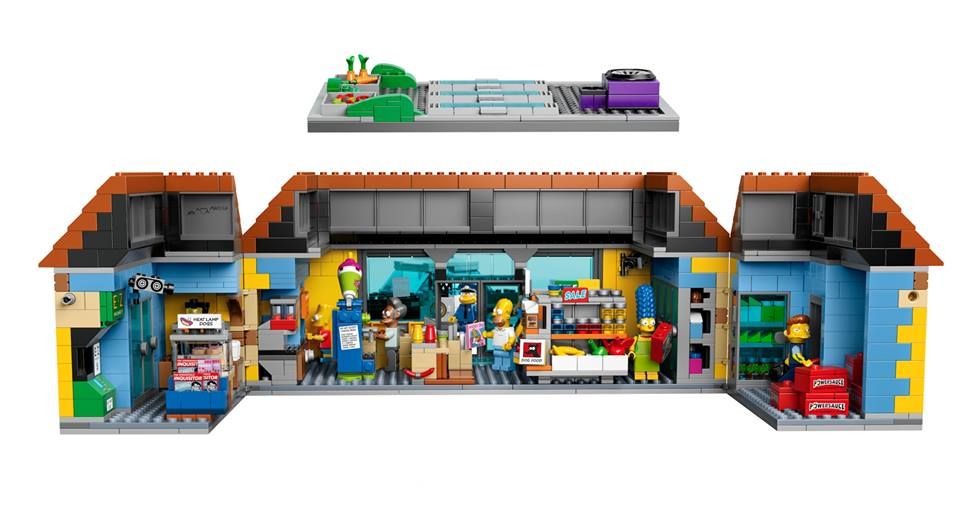 The characters just like in the first series of collectable mini-figures are once again really nice detailed and from these six guys I would definitely highlight Bart and the cop with the dirty shirt. Overall, this huge set is definitely a must for the Simpsons fans. I now that is hard to spend two hundred bucks, especially if you’ve done it last year with the Simpsons House but I think that sooner or later, the fans won’t certainly let this Kwik e-mart escape from their collections (Am I right, Daniel?). Please have a look at the official press release and extended gallery and enjoy the details!

Welcome to The Kwik-E-Mart—your one-stop shop for convenience foods at inconvenient prices! This highly detailed and iconic LEGO® version of The Simpsons™ store is packed with more rich, colorful details than a Mr. Burns birthday cake has candles!

Walk under the huge Kwik-E-Mart sign and join Homer, Marge and Bart as they browse the aisles filled with beauty products, diapers, dog food, pastries, fruits, vegetables and more—including Krusty-O’s and Chef Lonelyheart’s Soup for One.

Then head over to the refrigerated cases where you’ll find Buzz Cola, chocolate milk, various other drinks and snacks… and frozen Jasper! There’s also a Buzz Cola soda fountain, juice dispensers, coffee machine, arcade games, ATM and stacks of Powersauce boxes. At the counter, Apu is ready to tempt you with a variety of printed magazines, comic books, cards, tofu hot dogs, freshly expired donuts and his ever-popular hallucination-inducing Squishees.

At the back, there’s a storage closet complete with rat and an exit. On the roof you’ll discover Apu’s secret vegetable garden, while outside this amazing model features bright-yellow walls, 2 phone booths, a stack of purple crates, and a dumpster area with ‘El Barto’ graffiti, opening door and an iconic blue dumpster that also opens. You can also remove the roof and open out the rear walls for easy access. This set also includes Snake (a.k.a. Jailbird), who loves nothing more than stealing cars and robbing the Kwik-E-Mart—but this time Chief Wiggum is hot on his tail in his police car. Capture this bandit and return peace to the town of Springfield and the amazing Kwik-E-Mart.

Refrigerator cabinets feature a variety of beverages including cans of Buzz Cola… and frozen Jasper!

Drink a Squishee and get that sugar-high feeling!

Apprehend Snake before he robs again!

Stock up with overpriced convenience goods

Have a donut…. mmm, dooonuts!