Finally some images of the new Simpsons House, and what a house I would say… The first pictures of the Simpsons’ head set shows us a huge building with an aesthetic completely different from most of the city, friends or even Creator houses that I’ve seen so far, having an even more similar look to the real world.

This new Simpsons set brings more than two thousand and five hundred pieces and features the gigantic (yes, it looks considerably big…) house with a garage, several accessories for the garden such as the mail box, the barbecue, the skate board park, Homer’s Pink car and of course the Simpsons’ family: Bart, Homer, Marge, Maggie, Lisa and its pleasant (not…) neighbor Ned Flanders.

The House is built with a great color scheme, mixing the dark brown in the roof with the light brown of the walls, and presents two floors and a nice garage next to it. The house’s front has two big windows and a nice entrance, in the ground floor and above these there a couple of smaller windows for the rooms.

At the left side we can see a tall chimney with exactly the same height of the building and two additional windows. The first one has probably the most important feature which is allowing opening the enormous front and access to the entire interior. Finally, the back wall is the part that for now is not visible, but as far as we can see through the interior, there are some rooms with windows which make me speculate that it might be very close in terms of look to the front one. 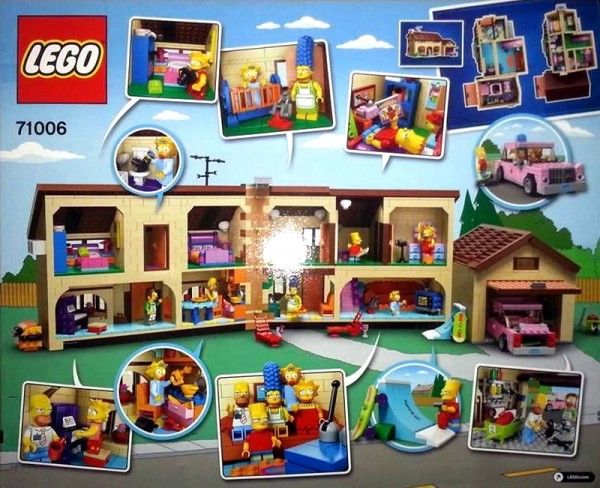 The entire roof, including the garage, can also be easily removed which is great in terms of playability and access to the interior without having to open the house. Talking about this part I would say that there are furnished rooms for everyone, a nice kitchen, a piano room and a nice living room with a big TV.

The interior is definitely pretty well detailed ( I especially like the big sofa for the all family, the piano and the full equipped kitchen) however in my opinion I think that there are too much walls when the house is opened, giving some times the sensation the some claustrophobia for the guys. 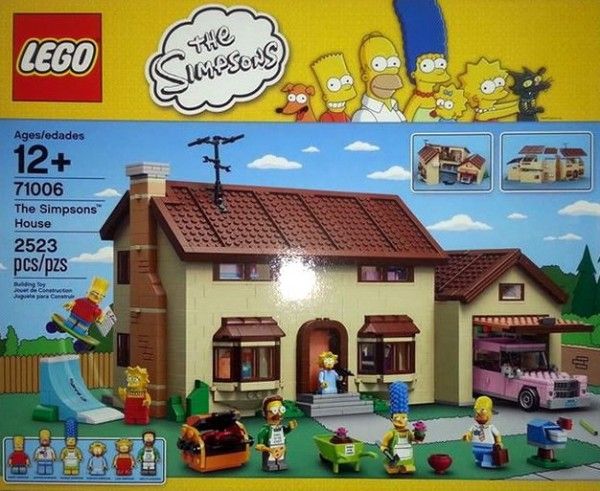 Continuing with the garage, it doesn’t seem attached to the house so I guess we can move it from one side to the other every time we want. It uses the same shades of the main house including a gate with the some color of the chimney and inside it provides space for Homer’s vehicle which not being pretty, surely recreates the original present in the eighties’ series. Made with pink bricks it has a completely straight design, a long hood but I wonder if it has room inside for the entire family…

Overall this is absolutely a great set! The house is simply beautiful, it has a lot to play with, inside and outside, and the mini-figures this time look better than in previous images. Will it worth the most probable two hundred dollars? For the true Simpsons fans surely it does for all the above reasons, however for those who were not very familiar with these cartoons I wonder if they won’t think in other sets to spend their money! Enjoy the pictures!

D’oh! The Simpsons™ House has been turned into LEGO® bricks!

Build The Simpsons™ House with detachable roof, modular design, car with dent, the famous family couch, 6 minifigures and so much more.

Recreate hilarious scenes from the classic animated TV series with The Simpsons™ House. Taken right out of Springfield, this amazing model is crammed with tons of LEGO® brick detail.

Lift off the roof and open up the house to discover Homer and Marge’s big family bedroom including bed and Maggie’s crib, Bart’s room with his skateboard and Krusty the Clown poster, Lisa’s room with her favorite books, jazz poster and more, and bathroom with shower, toilet, sink and mirror.

Lift off the top floor to reveal the fully-fitted kitchen with dining table, chairs, yellow and light-blue tiled floor and lots of pots, pans and other accessories. Then it’s into the living room with couch and TV playing Itchy and Scratchy, purple piano and more.

Next to the house is the detachable garage, complete with workbench, tool rack, vacuum cleaner, broom, toolbox, tools and the family car, complete with dent (because only in a LEGO world are dents a plus!), opening trunk and ‘radioactive’ bar from the nuclear power plant. Step outside onto the terrace and you’ll find loads of cool items, including a grill, wheelbarrow and air conditioning unit with ‘Property of Ned Flanders’ decoration, sausages, 2 garden loungers, flowerpots, a shovel, 2 fruit cocktail glasses, Lisa’s camera, Bart’s skateboard ramp with ‘El Barto’ graffiti and an antenna on the roof.

The Simpsons™ House is the perfect collector’s item for fans of all ages. Includes 6 minifigures: Homer, Marge, Bart, Lisa, Maggie and Ned Flanders.

Marge and Homer’s bedroom features a bed, 2 side tables, Maggie’s crib and Marge’s bagLisa’s room features a vanity mirror with hairbrush, stool, bed, table with lamp and cup, shelves with books, magnifying glass, backpack and a jazz poster on the wall

Bathroom features a shower, toilet, sink and a mirror

Can you spot all the items Homer has “borrowed” from Ned Flanders?

House is hinged in the middle for easy access

The perfect set for fans of LEGO® brick building and The Simpsons™!

Available for sale directly through LEGO® beginning February 2014 via shop.LEGO.com and LEGO Stores.