The Justice League Anniversary Party is a new Lego Batman Movie with exactly two hundred and sixty seven pieces that shows a pretty nice scenario for those who want to recreate some Batman movie scenes or if you want to have a new DJ stage with plenty of nice details and add it to other sets.

This 2018 set features as you can see in the pictures, a white stage with a central DJ table and all the required accessories, four superheroes mini-figures: (El Dorado, Green Arrow, Hawkgirl and Superman) and finally the Wonder Dog.

The DJ table is absolutely amazing and nicely detailed. With a big mixer panel in the center, it shows also two decks as well as a couple of controllers, all carefully placed in a beautiful white structure. Below, there’s a small structure which can be easily triggered and easily moves or rotates the front floor. 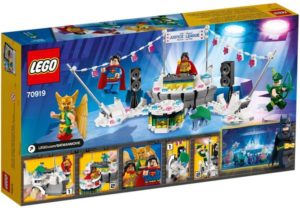 Two big speakers are nicely disposed aside the table, giving the party a big and powerful sound. Generically the structure is pretty well decorated. The small white pieces give it a nice and detailed look, the white color mixed with the tiny colored pieces are also pretty good and the long chains supported by the bars definitely ensure the final touch to the party. 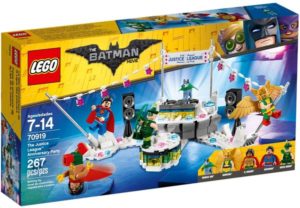 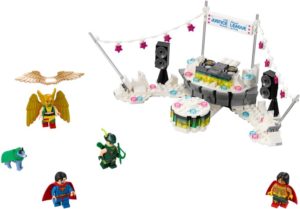 Overall it’s a pretty interesting set. The Justice League stage speaks for itself, and the mini-figures, despite not being my favorites, are as usual nicely accurate. The set should hit stores this month with a price around the fifty dollars. Enjoy it!