At the first glance, the truck looks rather big and contributing for that is the fact that not only the cockpit looks absolutely buried below the big cannon but also the wheel arches that are completely raised. Driving the truck won’t be easy for sure because the seat will certainly collide with the big cannon.

Talking about this one, it’s certainly impossible not to notice it. Mounted in the windshield, it is controlled by Bane that has more than enough space in the trunk. The cannon can shoot four studs that can be easily triggered through a small knob. In the back, there is also some extra toxic fuel, stored in a big yellow tank. 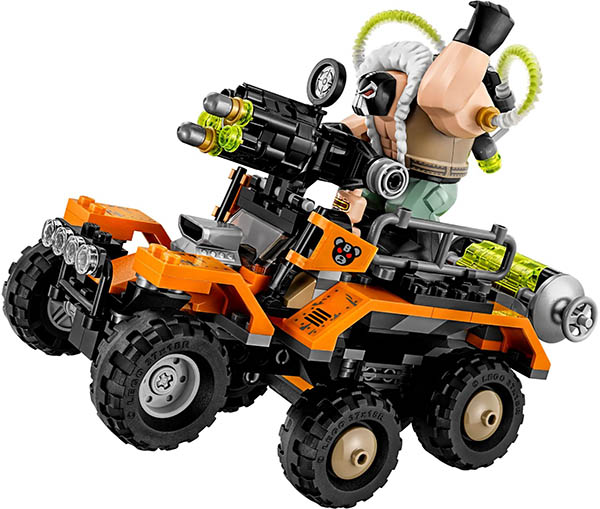 Batman, on the other hand, looks funny and completely helpless in its tinny Gyrocopter. With only a small seat and a rudimentary propeller, he has no more than a couple of batwings to fight back the truck. An unbalanced battle for sure!

Overall, it’s a very interesting deal for sure. The truck looks really nice with plenty of stuff to play with, the mini-figures looks accurate, I especially enjoy the Mutant Leader, and the price, around the fifty dollars, is in line with the rest of the theme. Enjoy it!