The engine looks big and all around there are definitely plenty of nice elements to enjoy: a black bar at the front with some lights, an animal skull, a powerful spot light and some detailed air entrances over the white hood. Nearby, aside the driver, the two rear mirrors look also slighter bigger than the usual. 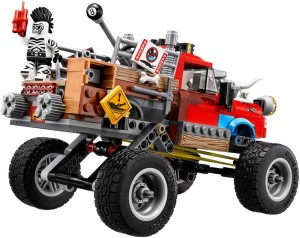 The roof, which features a few more lights and a black bar, detaches easily as usual and inside we can find a naked compartment with space for two mini-figures. There are no doors this time and the stickers, not only here but all over the truck, surely give an additional and fantastic look. 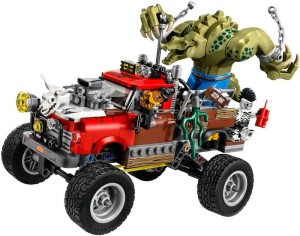 At the back, the trunk shows a lot of space for the big croc as well as some additional
features such as the big lever with a snooker ball that will probably trigger something that for now is still not clear. Everywhere, there is also a different detail to enjoy such as some boards, dynamite to throw, a “keep out” warning or even a big mysterious steering wheel.

On the other hand the batski looks also fantastic, attempting to its size. Built mostly with
black bricks and a red line all around, the couple of stud shooters and the colored control panel highlight from all the rest. As always, there’s a bat symbol at the front and the traditional bat wings at the back. 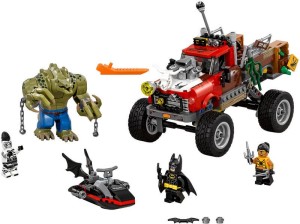 The mini-figures look, as always, really cool and the Zebra Man has absolutely caught my attention. Overall it’s a pretty decent set with lots of elements to enjoy but unfortunately a bit overpriced. Seventy dollars is its standard price and gladly is already available on retail. Enjoy it!