The Joker’s Notorious Lowrider is a new Lego Batman Movie set that will be available only next year. This medium size set has four hundred and forty three pieces and features a purple car with plenty of golden details and three nice mini-figures with assorted accessories: Batgirl, Harley Quinn and the Joker.

Personally and without seeing the movie, I would say that it’s not easy to like this car.  Obviously that it will certainly have an important role in the movie and seeing it in action will probably give a complete different idea, but for now it’s at least a bit strange. 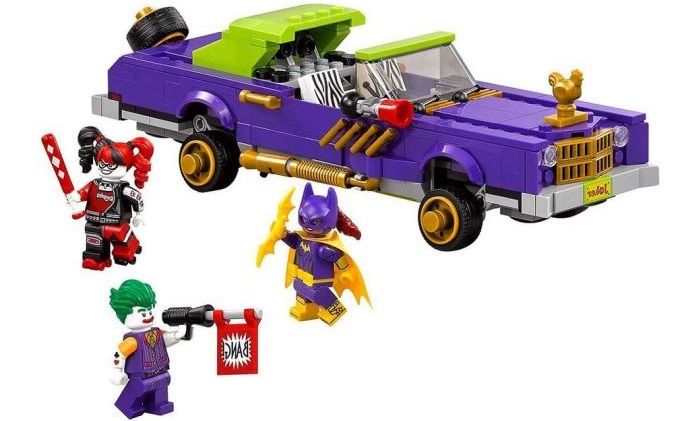 The car is a long purple convertible with a big hood and lots of golden details at the front such as the grid, the rims, and even the car’s symbol, a chicken! With eight studs wide, it seems to have a few technics pieces in the chassis that provides it, for instance, the raised, but strange, suspension.

With no kind of doors, the cockpit is reasonably large and has space for two nice white seats, the steering wheel and what it seems a sort of handler, probably for the gear box or even a tricky feature. The green removable roof looks really cool and gives the car a nice color combination.

The trunk is almost as big as the hood and has right at the back a spare wheel. The three mini-figures look absolutely fantastic. With detailed and colored suites, they’re really some good additions to the collection. In this point, my vote goes clearly for Harley Quinn with her black and red suite!

Overall, I think that I’ll have to wait for the movie to have a clearer or better opinion about this set. The car didn’t impress me much but the figures are awesome. The set will be available only in 2017 and should retail around the fifty dollars.