Lord Business has definitely a big opponent when it’s time to arrange some really nice battles. This new Yellow Mech is a big machine that appears in the Lego Movie that, together with Emmet and other characters, will do everything to stop the Evil Lord and all its attempt to stop the Master Builders.

The set is quite big, seven hundred and eight pieces and together with the Construct-o-Mech and its endless features list, it also brings four mini-figures that are Emmet, the movie’s main character, Angry Kitty and two nice skeletons. 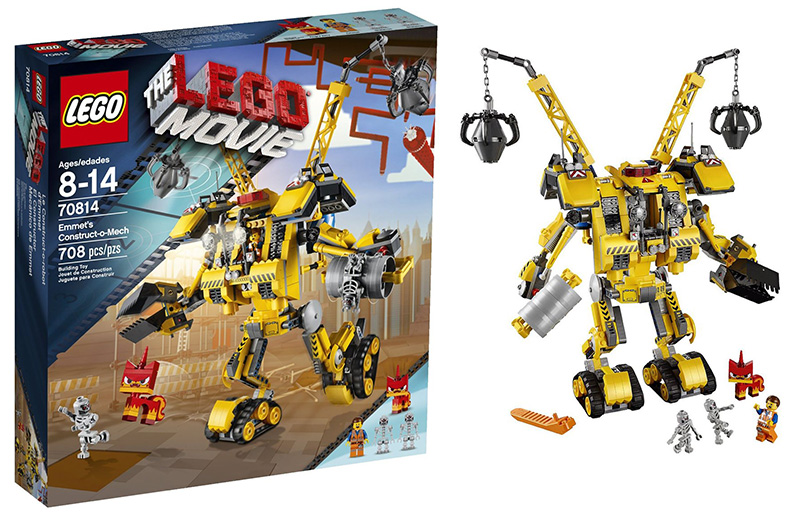 The Mech is considerably high and uses mostly technic pieces to support the main elements and a really nice color scheme with predominance of yellow and gray. Unlike the other theme’s Mechs, this brings a lot of stuff to play with, starting in the head and ending in its feet. On the top we can see a couple of winches with extended arms that not only can grab almost anything but also can swing from one side to another giving the mech the capability to destroy anything that comes around.

Just below them, there is the cockpit with the appropriate space for Emmet and all the necessary handlers. The arms have also two deadly weapons, namely a big cylinder and a black excavator that just like the winches, can easily grab a skeleton, for instance. The legs have also a particular functionality that is assuming several positions independently, which gives the Mech a really nice running mode.

One other interesting feature is the fact that there are small but nice details everywhere. Any part that we look we can see a sharp, unusual or useful brick as well as plenty of different details. Having a look at the mini-figures, Emmet is nothing more than an ordinary city worker, however the two skeletons are absolutely great and definitely a nice addition to any collection.

The Emmet’s mech will start retailing next June and the price will be something around the sixty dollars which at the first glance looks a bit expensive, however if we compare it to the number of bricks that it brings, it surely looks a really nice deal.