The lord Business Evil Lair is a Lego Movie set that has been released a couple of months ago. First of all, I must say that without seeing the movie it’s impossible to have the same impression that after seeing it. For me, when I saw its first pics, it’s was only a big structure similar to a couple of super heroes sets.

But now that the movie has hit theatres, the perspective is completely different. It represents one of the movie’s most important scenes where Lord Business kept prisoners all the master Builders and try to exterminate them and their building creativity.

The set features, among more than seven hundred pieces, the big Lord Evil Lair with two distinct sections, the battery and its switch, six mini-figures (Lord Business, Emmet, Vitruvius, El Macho Wrestler, Ma Cop and Pa Cop,) the pink Biznis Kitty, the mech structure for Lord Business and a couple of accessories such as the red sofa or the TV camera.

Having a look at the Lair, on the left side we can see a couple of think tanks, perfect to extract all the master builders’ ideas, which in the picture’s case is El Macho Wrestler. Just as the other part, the think tanks are extremely detailed and filled not only with different color pieces but also a few translucent elements. 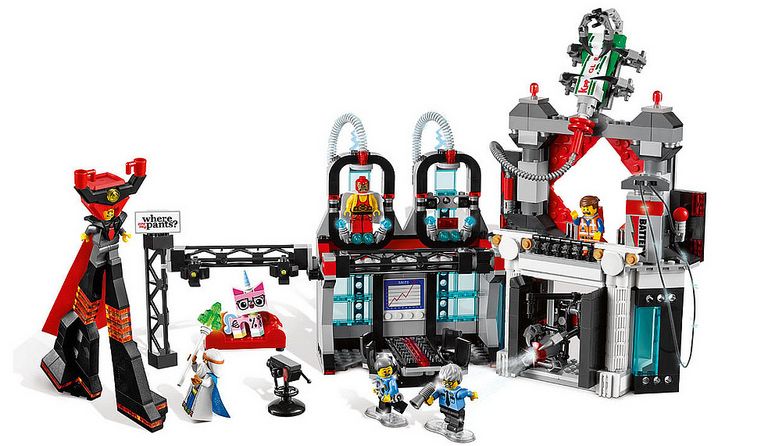 At the right, the big glue holder is placed on top, just above the trapdoor from where Emmet, the movie’s hero will throw the battery. In the base, Ma Cop and Pa Cop, Emmet’s parents that are caught by the glue, are quite well represented, having a couple of small grey bases, simulating a glue puddle.

The mini-figures are new, which is enough to be a good addition, but beyond that they look rather pretty with especial relevance, my opinion, for Vitruvius and El Macho Wrestler. The others, one way or the other represents a city worker and cops, which are always easy to find. Lord Business, the main character of the set looks also quite accurate with a grey suite and an angry face.

Overall I think that looks a great set, especially if you have seen the movie and liked it. The Lair seems extremely detailed, filled with different colors and, together with the seven mini-figures, allow recreating plenty of different scenes and reliving the movie. The Lord Business Lair is not cheap, it costs around seventy dollars, but according to the number of pieces, it seems a fair price. Have a look to the pictures and enjoy!