It’s not properly new, it’s not one of the most representative Lego movie sets but for the price, its look really nice and with a couple of interesting features. It brings only hundred and twenty two pieces that are enough for the melting room and for three little guys: Emmet, Wyldstyle and a Robot Swat.

As you might remember, the Melting Room represents the part where Emmet was captured by Lord Business and taken to the big melting chamber. Built almost all with small little bricks, it includes a huge red laser that include a control panel at a corner and a small mechanism that allows it to easily change its angle.

On the other hand, Emmet is also arrested in a small platform that is built up on a rotary base that with the help of a knob can also be adjusted or raised. There are also clips everywhere not only for the portable control panel but also for the several accessories and weapons that the set brings. 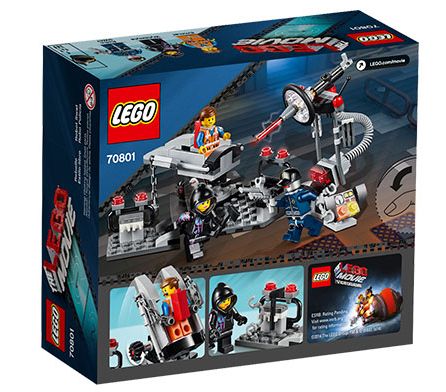 There is another smaller element, at the corner, which has only a small bar with a chain stuck to the Emmet’s chamber. Having a look at guys, they aren’t exclusive of the theme, however seem three great additions for any collection, especially Wyldstyle and the Robot Swat. For twelve bucks, I think that we can’t ask for much more. Have a look at the pictures: