The Titanium Dragon is a new Ninjago set that will shortly be available on retail. As you can see in the pictures, it features a big white and grey dragon for Zane, a sort of outpost to fight back the beast, and three mini-figures with assorted accessories: Zane, Clouse and Chop’rai, the anacondrai snake in a total of three hundred and sixty pieces.

First of all let me tell you that this Titanium Dragon is far way of being my favorite Ninjago set. However it definitely brings some really nice features, starting by its head that instead of being a single piece is gladly built brick head where it’s possible to identify all the main parts namely the eyes, the mouth and even its big tongue.

Just like most of all its big parts, namely the six long blades or the four legs, it uses a few technic bricks and is attached to the main body with the usual ball mechanism. On the top of the body, Zane has its command position, with no kind of handlers but protected with a brown structure. 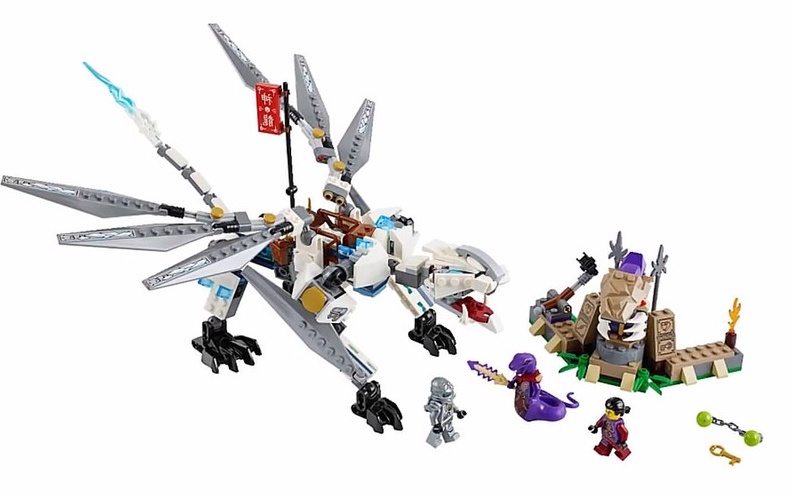 The legs and the big blades can assume several positions which is excellent in terms of playability, when it’s time to fight against Chop’rai. Finally the tail seems very thin but at the same time pretty nice mostly thanks to the long white and blue transparent piece on the edge. The small base to fight back the titanium dragon is symmetric and among a few interesting details has on the left a small catapult with a small with ammunition to fire against the dragon and also a small golden key that can be put inside the snake’s muzzle. 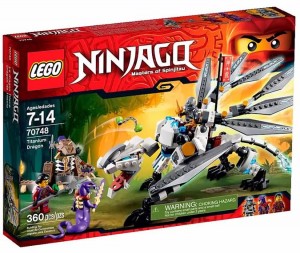 Overall I’ll probably pass this set. The dragons aren’t definitely my favorite stuff, and for forty dollars, I guess that there’re more interesting Ninjago sets, despite the couple of interesting details present in this Titanium Dragon.