The Blaster bike is a new Ninjago set that has recently hit stores. As you can see through the pictures, it features a bike filled with nice details for Cole, a small dragon, two mini-figures (Cole and Ghost Warrior Cowler) with assorted weapons and two new yellow Skreemers with a sausage that according to Lego can be attached to the mini-figures.

With a highly detailed designed and an awesome color scheme, the bike has a small technic structure with big golden wheels. On the edges, there are also four big blades that definitely give the vehicle a very cool Ninjago look.

The black curved pieces, just at the front of the driving position, hide the powerful engine from which the only visible parts are the two grey hoses. Next to it, on both sides there are two (one on each side) six stud shooters, ready to blast the small dragon. Just at the back of each one, a small knob is responsible to trigger the mechanism.

At the back, Cole has a nice driving position that includes not only a handler but also a small black flag. Having a look at the Ghost Warrior’s dragon, it isn’t very big but it’s made with plenty of small bricks which not only give it a pretty realistic look but also the appropriate space, for instance, for the warrior’s seat. 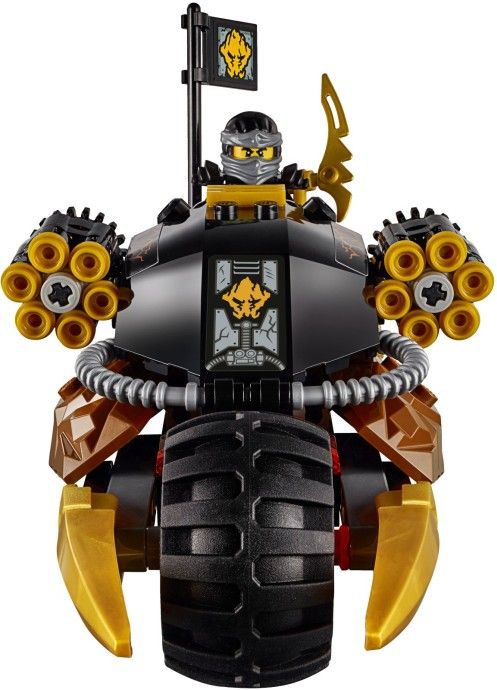 The two mini-figures couldn’t be more accurate, I especially highlight Cole’s Torso and Warrior’s transparent legs and head , and their weapons are also an added value in terms of beauty and playability. This new Ninjago set brings a bit more than two hundred pieces and should retail around the twenty dollars. Have a look at the gallery and enjoy!