The Jay Walker one is a new Ninjago set that has recently hit stores. At the first glance it looks slightly smaller than the piece count would suggest, featuring three hundred and eight six pieces which will be responsible for the vehicle, a small structure called the ghost prison, four mini-figures: (Jay, Bansha, Ghurka and Wail) with assorted weapons and lots of disks with printed ghosts.

The Jay Walker one uses mostly blue and golden pieces mixed with several different stickers which give it a very cool look. The main structure uses a few technic elements and on both edges the extra large wheel with golden rims give the car the appropriate look for surpassing all the obstacles.

The main idea in terms of playability looks pretty cool, at least in theory, and consists on catching all the ghost disk thrown by the ghost tower with the small scoop at the front of the vehicle, recycle them at the back compartment and throw them again with the big cannon placed just next to the cockpit.

In practice, I think that is not so easy to do it, but there are certainly other ways to play with the two disk launchers. The driving position is placed on the left and has only the sufficient space for Jay, a steering wheel and a small panel just in front. Behind it , there is also a brown box with space for four extra disks. 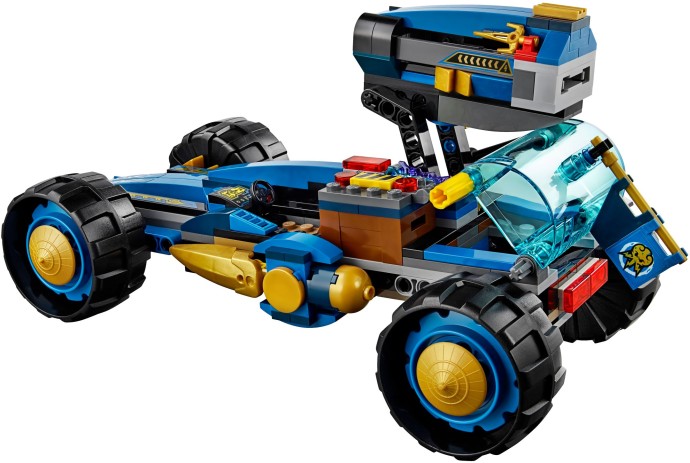 At the back, the transparent container and the big cannon are easily movable at the same time, allowing not only to access to the interior but also to put the cannon in a fire position, to attack the ghosts and the tower. The ghost tower has a nice color scheme with plenty of sharp details and a unique yellow blade at the center. On top, as mentioned before, there is also a nice disk launcher to fire against the Jay Walker One.

Finally, and once again, the mini-figures are simply fantastic and among such details I will certainly highlight the transparent yellow parts of the two ghosts. Overall, it seems a pretty nice Ninjago set with some really nice elements to play with. At the first glance, the car and the temple doesn’t seem to justify almost four hundred pieces but we must not forget that it measures almost 25 centimeters and the temple seem to use plenty of small bricks which together are definitely two big reasons to justify it and the consequent price of forty dollars.