The Chain Cycle Ambush is a new Ninjago set that has hit stores this month. With exactly two hundred and ninety six pieces, it features a nice colored ghost Bike, three mini-figures (Zane, Wrayth and Pyrrhus) with awesome assorted weapons, a small glider, two skeemrs, that can be attached to the mini-figures, a small structure called Spirit Vortex, and a couple of additional accessories.

At the first glance, I would say that the bunch of sharp pieces and details definitely hide a couple of interesting features that this Cain cycle has in terms of playability. On the other hand it is also possible to immediately identify some dragon’s details such as the fearful red eyes or even the long scales.

The vehicle itself is clearly a tricycle with a tiny wheel in the long front and two bid fat wheels at the back. The blue dragon’s head is placed in the middle just at the front of the driving seat making a real cool effect. Stuck in the cockpit and all along the vehicle’s front, there are also a couple of yellow chains that are very cool in terms of look.

Just behind, there is also a brown box with chain bolas that can be fired by the driver at every moment. In the back, the playability continues with a rear catapult, which is visible in the pictures most of all thanks to a red rubber, that can easily fire a couple of chain balls over the vehicle against the glider. Aside the catapult the Cycle has two small translucid tails with different shades which once again looks really nice! 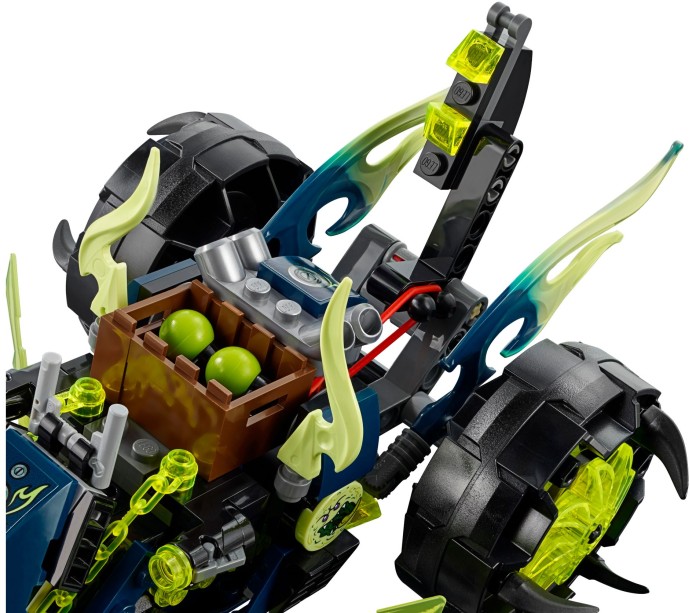 The Glider is quite simple but with some long pieces and a couple of clips to hold weapons, it will absolutely be quite useful in terms of playability. The mini-figures are as always on Ninjago, pretty accurate and in my opinion one of the best in terms of details. Overall, I would say that it’s not the most enthusiastic set at the first look but it’s absolutely interesting in terms if details and playability. Enjoy the gallery!