A new massive destruction machine has just hit to store. The Destructoid is a new Ninjago set that presents a huge war tank and three mini-figures (Zane, Min-Droid and General Cryptor) among more two hundred and fifty pieces. Built up on a square technic structure, the new Destructoid is considerably wide and presents some really nice features to play with.

The first impressions go for sure in the direction that we’re in presence of a vehicle with a complex look, I would say that with the exception of the rubber crawlers there isn’t a single part with straight lines.

The cockpit, placed on top, looks absolutely fantastic with plenty of space for the mini-figures and a bunch of really nice elements such as the central “disk” with a red center at the front, a few black claws scattered around in several places, and at the back the flags and the red ax look also very nice!

Below the cockpit, integrated in the technic structure, there are a couple of great weapons, easily triggered through the back of the vehicle. The couple of long swords, at the front, move up and down at the same time, and as it wasn’t enough, just between them there is a nice disk launcher with three disks, capable of easily hit the enemy. 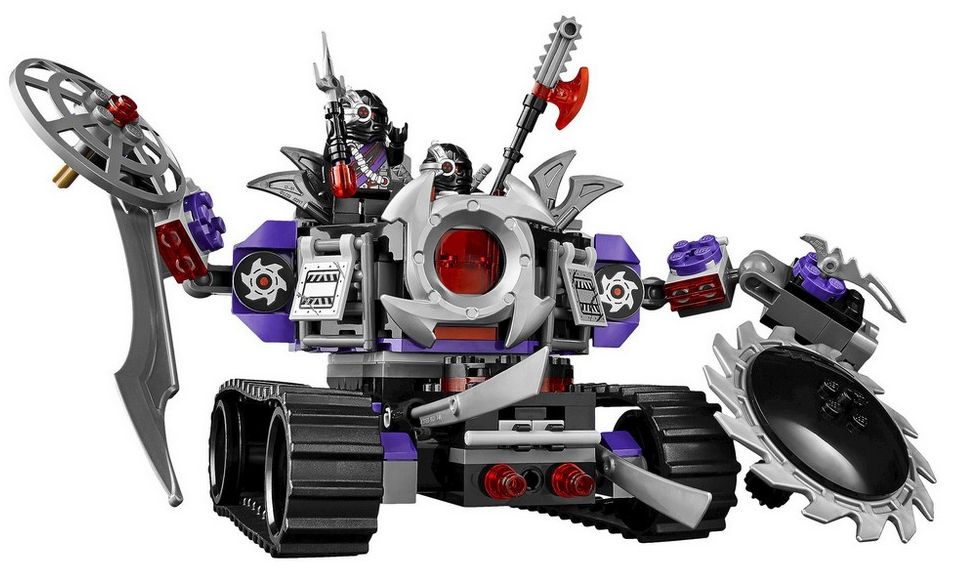 But the fun doesn’t end here in terms of weapons. Just aside the cockpit, slightly backwards, there are two big movable arms with a deadly weapon each one. At the left a long saw blaze is capable of smashing anything with its rotating function and at the right, another long sword has the ability of reaching the enemy at a long distance! The sturdiness of the vehicle looks amazing, and I must say that I especially enjoy the black crawlers with the four wheel axes totally in black! Probably, they might be new because I don’t remember to see them anywhere in previous sets!

Overall, it seems a really nice tank with a bunch of nice features to play with. The mini-figures are once again quite detailed, bringing each one assorted weapons (The General Cryptor has three!!!) and for around twenty five dollars this seems absolutely a nice addition to any Ninjago collection. Please have a look at the gallery!