The Nindroid Mech Dragon is a new Ninjago 2014 set with almost seven hundred pieces and as you can see through the pictures is a revisited version of an ultra dragon, a powerful Ninjago beast that has inspired a few previous sets such as, for instance the 2012 set Epic Dragon (9450).

At the moment, it is the biggest of this 2014 wave, and besides the big MechDragon, it brings a very interesting buggy with big wheels and plenty of weapons and five mini-figures: Sensei Garmadon, Evil Wu (these two until now are exclusive of this set), Lloyd, Nindroid and General Cryptor.

As it concerns to the dragon, it’s not of my favorite figures (I’m not a big fan of Ninjago…) but it definitely looks a bit complex in terms of structure, there isn’t a single detail that hasn’t a pointed shape. The wings use multiple blades, the head has pointed teeth and even the feet have several claws.

In terms of features, besides the spoken blades in the wings, the dragon has also on the top a couple of big black saw blades, a big and powerful cannon (this weapon that appears in several sets is extremely interesting because the missile can reach a few meters) and a nice mechanism controlled with a knob at the back that can rise or move up and down the entire structure. 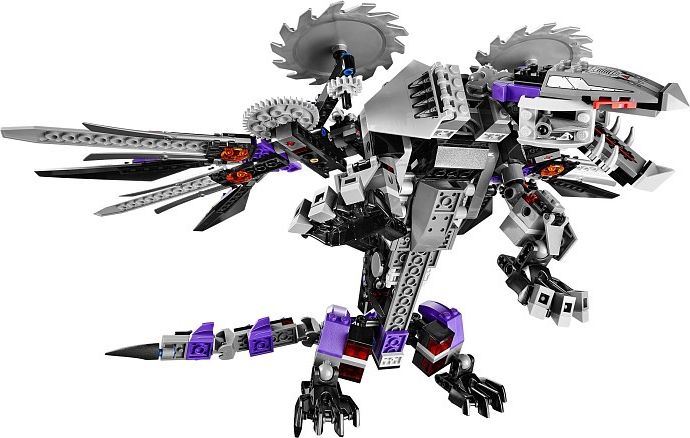 The dragon can assume several position thanks not only to the traditional ball mechanism in the feet with gives it a good balance but most of all thanks to the beast’s neck that moves around ninety degrees. Finally the two powerful saw blades, with the help of a few technic pieces, are also movable and can get out a bit of the dragon’s structure.

The Buggy is absolutely my favorite. Mixing grey pieces and a few golden details, namely the couple of swords at the front, it looks quite sturdy which is achieved most of all thanks to the big and black tires. The cockpit it’s quite long but too low in terms of height which leaves no alternative to Sensei Garmadon to drive in a lying position. 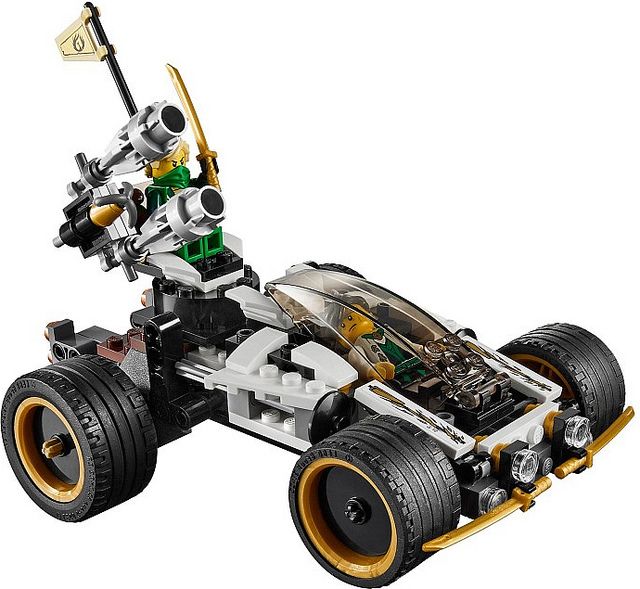 Just behind the cockpit is installed a double cannon weapon and a control position with a nice seat to fight back the big dragon. This small platform rotates all the 360 degrees and the big weapons can assume multiple angles to shoot perfectly against the enemy. Near the double cannon as it wasn’t enough there is also a single golden flick fire missile.

Globally for the Ninjago’s fans, especially for those who don’t have any kind of these dragons, this is definitely a huge set. The grey and purple beast has plenty of interesting details and features, the buggy is pretty nice with a huge playability and the mini-figures, as always in this theme, are quite well accurate! Have a look at a few additional images in the gallery: