The Lego Ninjacopter is another Ninjago set that has been unveiled yesterday and at the first glance the impressions couldn’t be better. Remembering the galaxy squad vehicles, the Ninjacopter set is quite big with around four hundred pieces and brings besides the big aircraft, a smaller ship, a sort of air jet and four mini-figures which are Zane, Pixal and two Nindroids.

The Copter is obviously the master piece of the set and where all the attention is focused. Made mostly with white bricks it mixes a few blue parts and stickers with golden pieces which produces an amazing final result in terms of aesthetic. There are stickers everywhere and not being an enthusiastic fan, I must admit that they add the heli an even more enthusiastic look, especially those blue thunders. 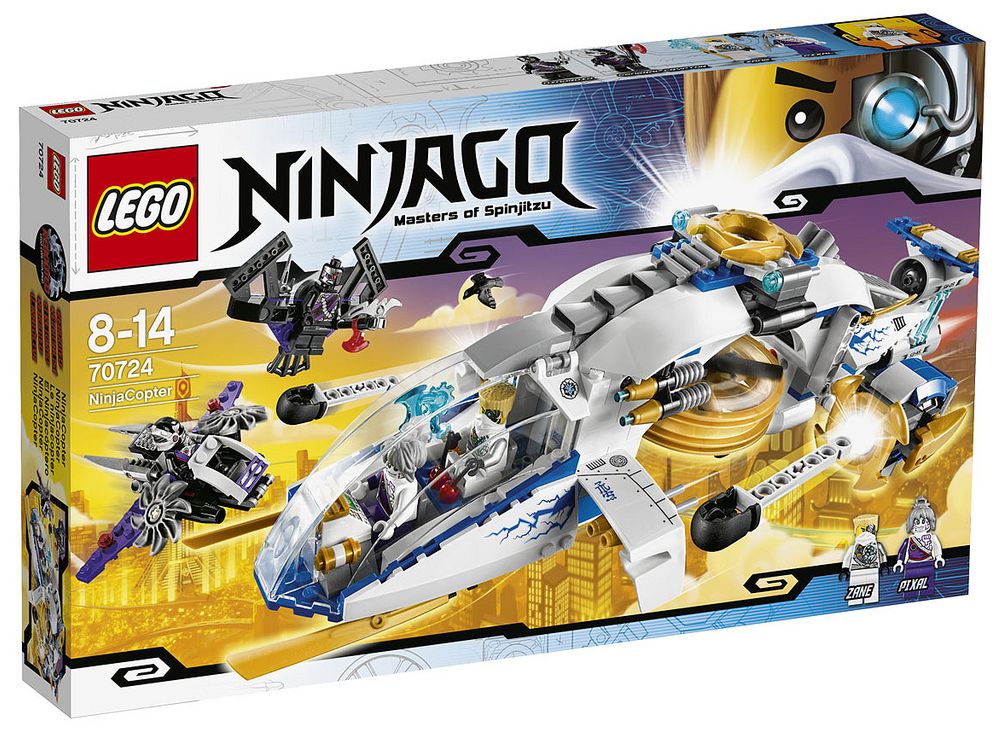 In terms of building, for now it’s hard to say how the main structure is composed but through the set box it’s easy to find a few technic pieces that will probably hold that strange propeller placed in the middle. In terms of weapons, there are many everywhere. At the front, below the cockpit, we can find a couple of long golden blades, next to the cockpit a couple of flick fire missiles, above these there are also two laser guns ready to fire against the enemy and at the back, a couple of big black and powerful missiles end the huge list of this war machine!

In the front, the cockpit is perhaps one of the most pleasant that I’ve seen in the last times. With a big windshield that at the first glance doesn’t open immediately, inside there is space for everything, namely for Zane, Pixal and respective handlers. Besides the couple of gray seats, Zane has at its disposal a couple of red handlers and Pixal has a nice printed control panel.

Just behind them, the propeller is placed over a golden and round platform. Through the available image, it is not possible yet to find out which parts turn around, if only the propeller, if both, but the final look is definitely quite unusual being at the same time very beautiful. Above them, two big white arches support all the engine structure, namely all the air entrances and the exhausters. 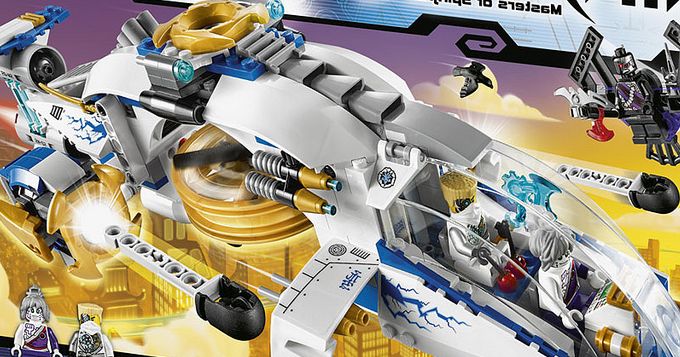 At the back, the balanced tail definitely hides a couple of mysterious features. Besides the spoken missiles, it has at the back a couple of extra rotors, a few more stickers and two big missile launchers that the image suggests that shrink inside the structure when in surveillance mode.

Having a look at the smaller aircraft, it is quite simple to build, compared to the big one, but at the same time it has all the elements needed to fly and adds a few interesting additional features to the set. The pilot has a nice seat, and in the small purple wings we can see a couple of grey saw blades that easily turn around in order to attack the enemy. The black jet structure, attached to the other warrior, looks a bit more complex but just like the aircraft, it brings a couple of nice weapons namely sharp spears.

Overall this looks a very nice set. With four accurate mini-figures and a big Ninjacopter with a galaxy squad touch, it definitely brings a lot of fun and playability. Rumors mention a price around the fifty dollars which looks in line with the rest of the line.