The OverBorg attack is another new Ninjago set that will be released next year and whose first images have been recently surfing in the internet. It will bring exactly two hundred and seven pieces which will include two vehicles, an all-terrain tank bike and a Ninja Cycle, and two mini-figures, Lloyd Garmadon and Overborg.

First of all let me tell that this set (and probably a few others) look a bit different from that oriental spirit that Ninjago used to have. These two vehicles are closer to Super Heroes and there are a few details that clearly show that Ninjago has definitely came to town, namely the green garbage can and the small ramp with the red water pump.

And if this is not enough, have a look at the set box background that shows parts of the new Ninjago City as well a completely different color and picture scheme from the previous set wave! The set box’s front also shows some of the features that the set brings which I think that for this theme is also absolutely new.

Having a look at the vehicles, the green bike uses a few technic pieces for the base and a couple of extra large wheels on the edges. The combination of the green with golden pieces is definitely very nice namely the big blades just below the driving position, which unfortunately has only two studs for a standing position, which is understandable according to the bike’s structure. 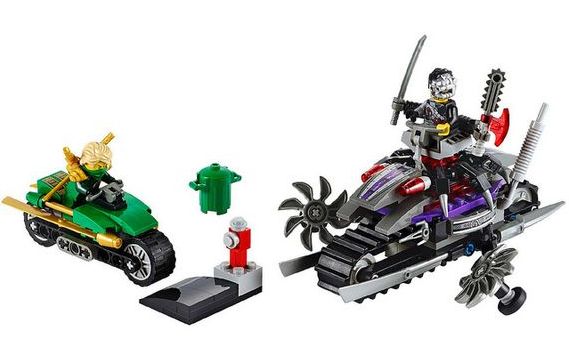 The core is obviously the all Terrain tank bike which is considerably bigger than the green bike, thanks not only to the structure but most of all to the Overborg mech chair. This one cleverly can be detached from the main body of the vehicle, constituting an extra machine to fight Lioyd Garmadon. With a piloting seat, the small mech has also a saw blade and a sword. Looking at the set box, I must say that I’m pretty curious about seeing the saw blades rotating with the tank’s moving mechanism.

But the features and accessories of the tank don’t end here, because we can also find a couple of laser daggers, a black tread, and a couple of front slicing circular saw blades which definitely is a bunch of stuff for such a small vehicle. The chassis, just like the green bike, uses a few technic bricks but the wheels, in this case are a rubber caterpillars which allows it to surpass some undesirable obstacles. 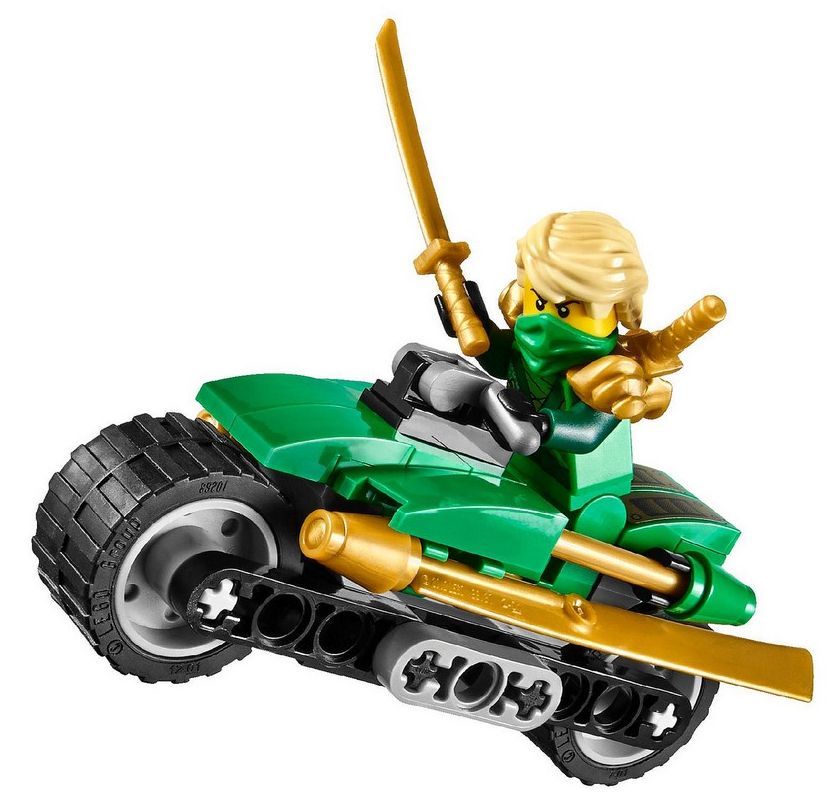 Finally and looking at the mini-figures they’re surely a great addition to the collection. Cyrus Borg has a red spot in the eye, just like General Crypton and Loyd Garmandon has the same scarf for instance of Kai of the 70721, which looks like a new tendence in this wave.

Just like the Kai Fighter, this set will retail around the twenty dollars and will be on stores next summer. The vehicles look pretty accurate and with many interesting features (those spinning blades definitely caught my attention). Please have a look at the gallery: