Strange name for a set, strange creature but definitely a box with plenty of nice details and features to enjoy! The new garmadon, Garmadon, GARMADON was already known for a while but only now the official images have been surfing on web.

The shark is mostly built with grey pieces and seems to have a considerable size. All the shark shapes can be clearly identified and some extra members can also be found namely the two extremely detailed paws with big claws. The mouth seems also to open which suggest a sort of ramp to the interior.

On the top of the sub, right in front of the fin, Garmadon has its stand position to observe the damages. At his back a couple of cannon maneuvered by Shark Army Thug give the sub some extra fire power. In the tail, three yellow propellers are responsible to move the submarine. 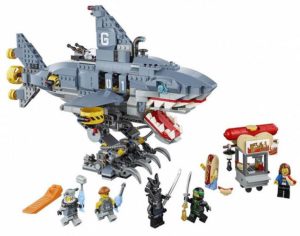 Having a look at the stand, I think that it’s absolutely great and together with the hot dog guy, it is surely a good addition to any town. For me that didn’t see the film or observed the back of the set box, I have no doubt that there will certainly be more additional features in the sub that can’t be seen just with these two pics. 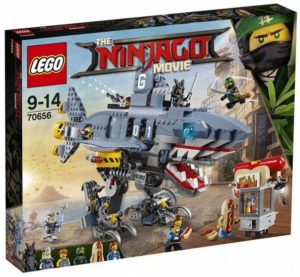 Globally, it’s a very cool Ninjago Movie set with plenty of nice elements to enjoy. The submarine is obviously the head piece but the stand as well as the mini-figures are also nice added values to enjoy. The set should be available only next December with a retail price around the eighty dollars which seems to be very interesting deal.