Ninjago City Chase is a small Ninjago Movie set with around two hundred pieces that will shortly arrived to stores. Not being, in my opinion, one of the most enthusiastic sets of theme, it features however some pretty colored elements to enjoy and to play with.

The set includes an unusual Police Tuc Tuc, a street food stall with plenty of stickers, two street lamps connected with a chain with lots of lanterns and five mini-figures: Lloyd Garmadon, Nya, Officer Toque, Shark Army Thug and Ham, all of them with assorted accessories.

I love this Tuc Tuc! Not only it is quite unusual in Lego, but also it looks absolutely funny. With a simple structure and tinny wheels, it has two different compartments, the cockpit at the front with the handlers and a second seat for another character. The bars also allow the guys to grab them when the vehicle is on movement which is definitely very cool.

The small food stand is a typical Ninjago structure with Chinese details. It has on each side a basket for food that contains food and fish. As usual, there are also plenty of stickers all around.  The street lamps with all the festive lights are also very cute and can be a really nice addition to several different scenarios, even on other themes. 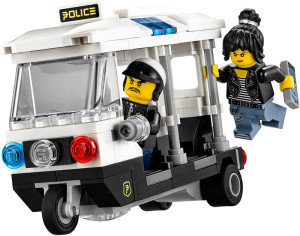 Globally, it looks a really nice deal, especially if we attempt to the price, around the twenty dollars. The mini-figures, completely different from Ninjago standards, look pretty accurate, and all the rest, is simple but interesting, especially if we think of adding them to other scenarios.