The Kryptarium Prison Breakout is a new Ninjago set with exactly two hundred and seven pieces that will shortly hit stores. As you can see, zero of crazy vehicles this time, featuring a small prison with two cells and five mini-figures (Captain Soto, a Kryptarium Guard, a Giant Stone Warrior, Kai and Zane) with assorted accessories.

Just like the rest of the themes, Ninjago doesn’t live only with large and detailed buildings and awesome cars, there are also some minor sets that are surely a great addition to those head pieces especially in terms of playing features or scenarios.

This new Kryptarium Prison looks very simple, showing a traditional Ninjago wall in the middle with red columns and a beautiful Ninjago artifact with a sticker containing a figure right in the middle. The cells look similar, containing the minimum space in the interior and the traditional door with bars, present in many other Lego sets. 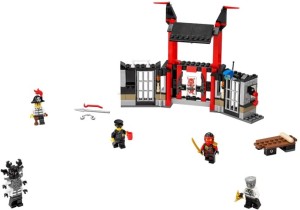 The left shows also a couple of clips to store some weapons and just like the right one, a small torch next to it. This one features also a couple of different details such as a small camera on top and at the corner a red phone. Globally the entire structure is prepared to assume multiple position angles, thanks to the four adaptable pieces. 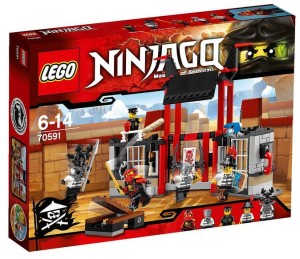 Just as usual, the figures are simply awesome and I especially enjoyed the Giant Stone Warrior with its big head and triple arms. Globally, it’s surely a very interesting seat with a decent price, capable of being an added value in terms of playability when joined with other Ninjago sets. The Kryptarium Prison Breakout will shortly be available with a price around the twenty dollars. Enjoy it!