The Airjitzu Battle Grounds is another awesome Ninjago set with a touch of beauty and a great level of playability. The usual fantastic buildings with a high level of details that Ninjago sets use to bring are a bit forgotten here and give place to the two Airjitzu flyers that will certainly provide plenty of fun hours.

This new set has exactly six hundred and sixty six pieces, the number of the beast, and features the battle temple with a central gate, two flyers, five highly detailed mini-figures (Lloyd Garmadon, Nya, Yang, Martin and Chris) with plenty of assorted weapons (some of them seem quite rare!).

At the first glance, I think that the two flyers get all the attention, but it’s surely unfair, because the temple shows also another three great elements. Right in the middle, the central gate looks cool with two columns on both sides and a golden trident on top. Being built in the top of a small structure, the guys need to go down through the steps to access the “interior” and to the hands in the flyers.

Next to the entrance, there’s a small bench with a nice dark brown shade and built with plenty of small pieces, that shows some clips to store weapons. On the opposite side, there is a usual Ninjago house with a black and red scheme, a tall black roof and the usual windows with native stickers.

Finally and symmetrically placed, there are on the edges two nice flyers, each one of them mounted up on a technique structure with plenty of small bricks. I don’t know exactly which is the purpose of each one of the features that can be identified in the pictures, but the main idea remains: to shot the flyers. And as far as I’ve seen, they can easily go up to six or seven meters high. Inside, the small cockpit has only the appropriate space for the warrior. 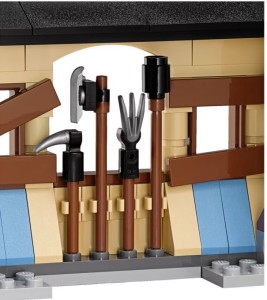 Talking about these, they look, as always, pretty accurate and with some nice printed details. If I had to highlight some of them, I would certainly choose Yang, Martin and Chris that are simply fantastic. Overall, it’s absolutely an interesting Ninjago set that shows plenty of playability that keeps the usual Ninjago beauty. The deal is even more interesting if we notice that it will hit stores in a couple of month with a price around the sixty dollars. Enjoy it! 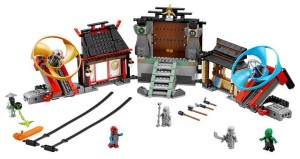