The Kings Castle is a new set of the revisited Castle theme and will be available on the second wave of releases, next summer (this one is planned for August). From the available pictures, taken on the last Toy fair and also through the set box, we can see that we’re surely in presence of a terrific building not only in terms of beauty but most of all in terms of features.

The castle is a square building, with walls all around and it’s built separately, over a few green plates and then attached in the end. If you have for instance the monster fighter’s vampire castle, you’ll notice some similarities in terms of building techniques. The color combination looks good with several brown shades and brown representing the wood materials, however looking at the pictures I must say that I don’t like much those little blue pieces at the edges, all over the castle. I surely hope to change my opinion when I see it alive. 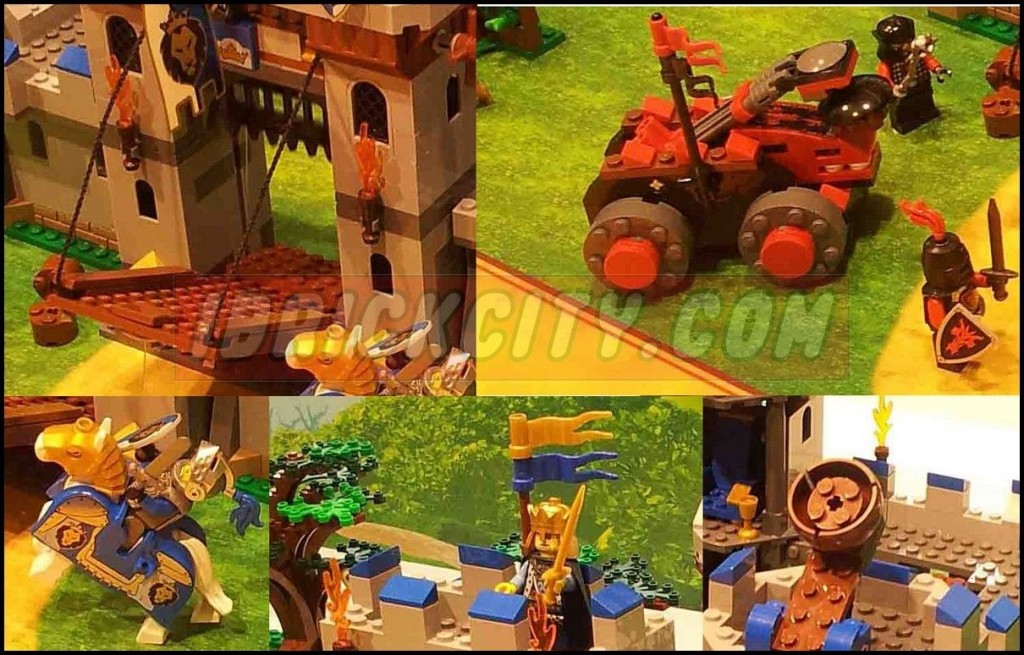 Talking about the mini-figures they look excellent and at the moment, I still have my doubts about the real number that this castle will bring. Looking at the set box we can easily find seven (the king at the top of the castle, two soldiers, the horseman warrior, and three red invaders, two of them near the catapult), however it’s not a final number. 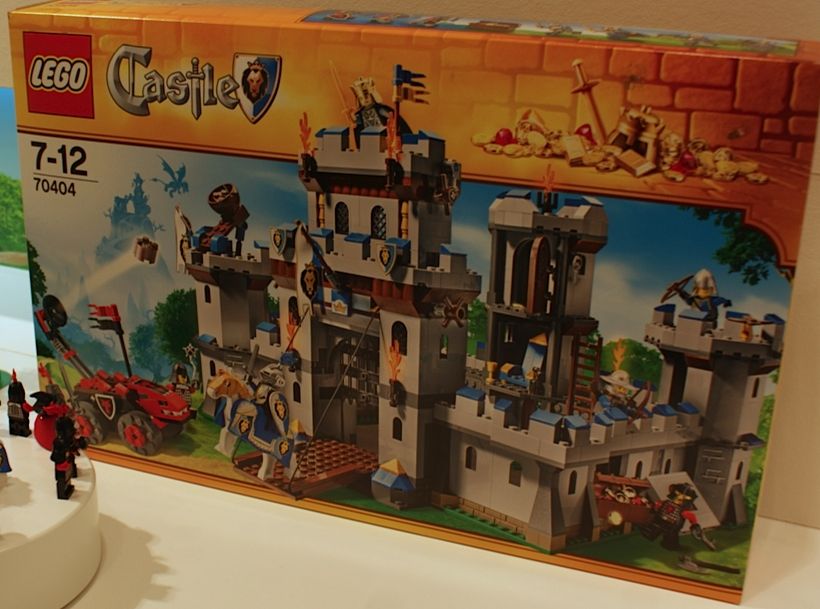 The castle has three towers, cleverly distributed to defend the fortress from the enemy and at the front, it takes places the majestic entrance, the tallest frontage of the building that is constituted by a drawbridge that can be raised or lowered through a couple of side levers, and above it, an additional battlements to fight the enemy. 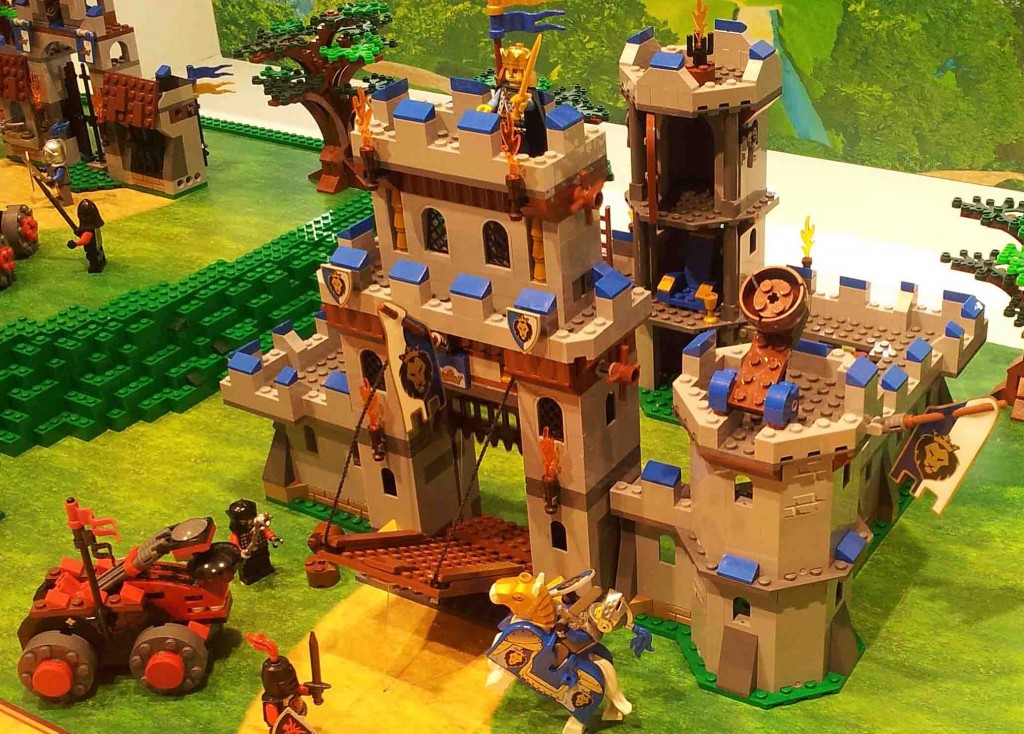 In terms of features we can see a small catapult, over the top of the left tower, the kings throne (that has a big blue seat and a golden cup) is placed just at the back, inside the building, on the second level of the big tower and of course the mentioned drawbridge that has also a black gate that I suspect that can be easily lifted. 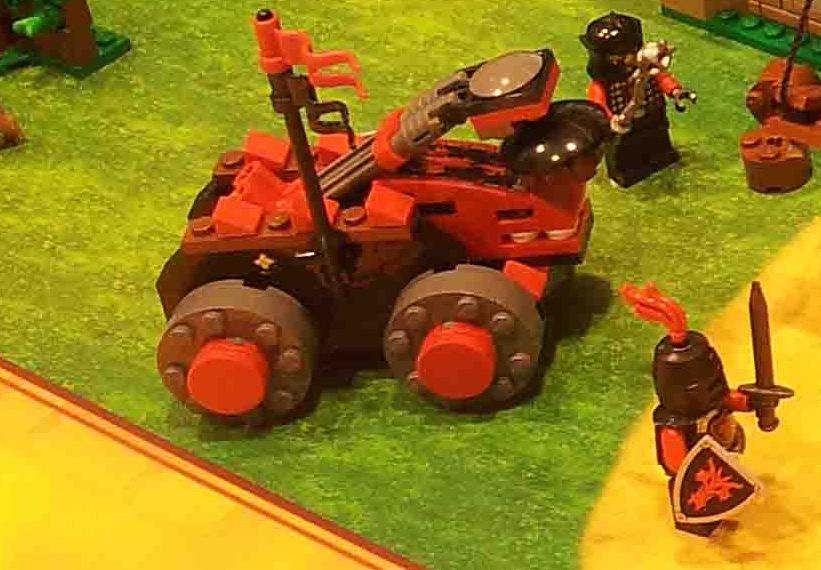 All the castle guards, as well as the king, have a bunch of different weapons such as swords, crossbows, hammers and of course plenty of ammunition for the catapult. Finally, at the right side it seems that there is a hidden door from where the invaders easily can steal the treasure’s chest.

Having a look at the invaders, they are easily recognized because of their red color scheme. It’s obvious that the first thing that everyone looks about these guys is the mobile catapult, made with red and dark grey pieces. It has four wheels, a curious muzzle where the teeth and the eyes can be easily identified and of course the powerful catapult to defeat the enemy. 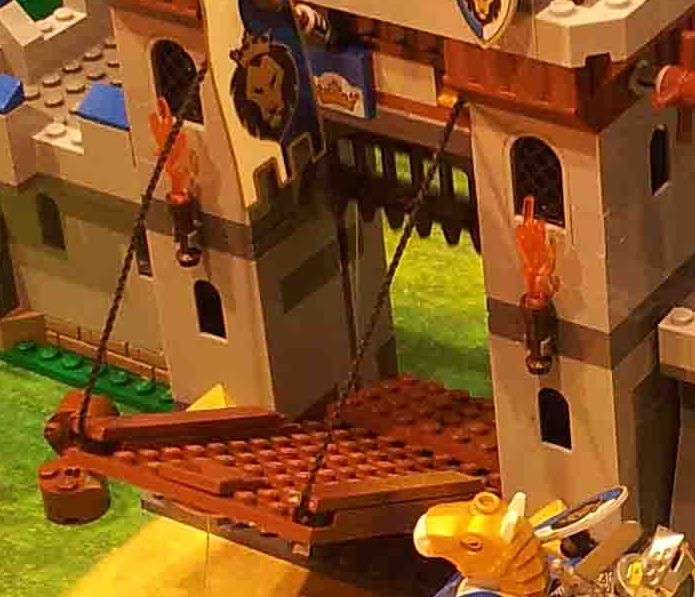 A final note for the white horse, as well as its night, that are both superbly accurate. On the other hand the castle is also nicely decorated with plenty of flames, kingdom’s flags and a few golden pieces especially at the front. Talking about the price I’m afraid that will be difficult to see it on stores for less than hundred dollars.