Sometimes playability is not only vehicles and action. In a great number of times you can find it in buildings, fortresses, and castles and particularly in this new Merlok’s Library. It’s not very big, it has a bit less than three hundred pieces, which won’t put it in a prohibitive level in terms of price.

This new Nexo Knights set features, as you can see, the Library with the usual color scheme, clue and red, a Flame Bat, a small fighting vehicle and three mini-figures (Lance Richmond, Ava Prentiss and Crust Smasher) with plenty of different tools and weapons.

And I definitely like it not only by its self but also as a complement for the bigger Fortrex (70317).  With a small technic structure, the central tower has two different levels, with plenty of nice details at the front that include a slot in the blue panel and a small prison on top. In the back, the building features also some panels in the ground floor and something that Lego calls the book of revenge, right above it. Finally on top there’s a nice orange hologram represented with a transparent brick. 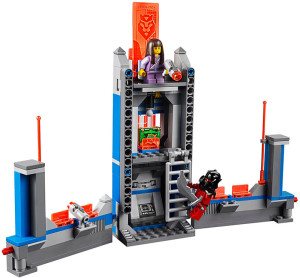 Outside, there are two walls that can assume different angles towards the tower, which is surely my favorite part. Each one of them features a small tower on the edge and a stud shooter, right in the middle, probably to fight back the flame Bat that being very simple (basically is a small vehicle with a piloting position in the back and a powerful ball shooter right at the front), will surely make some mess in the library.

The mini-figures look pretty cool, with awesome details and I must say that the Crust smasher’s helmet definitely caught my attention! Overall it’s a very interesting deal, already available on stores, with great playability that includes an attractive price: twenty five dollars that seems pretty fair, attempting to the piece count!