Two ice vehicles, a nice and interesting building with lots of features and tricks and five mini-figures (Maula, Mottrot, Vardy, Rinona and Rogon) of three different tribes with a bunch of nice weapons and accessories, is what you’ll find in the new Legend of Chima’s set, the Mammoth’s Frozen Stronghold.

The masterpiece of the set is obviously the strong hold that belongs to the Mammoth’s tribe. It has three distinct elements, nicely distributed, but the central arch definitely caught the first attentions mostly thanks to the big mammoth’s head perfectly sculpted with a big brown trunk.

The central structure is all built with white bricks mixed with a few blue transparent pieces and at the back there is probably the best feature of the set: a trigger mechanism that allows holding one of the cars and throw it to the front against the enemy. All that is necessary is trigger a small lever at the back and the vehicle will go out easy the help of the chi power.

Above it, the Mammoth head has all its major parts perfectly identified namely its eyes, the ears and of course the long tromp that has on its edge a small stud shooter which looks pretty interesting in terms of playability. On top, the two mammoths have a nice control position where they can observe all the enemies movements.

Connected to the center, on both sides, there are two small towers, similar to each other and built with plenty of small pieces. One of them has a small disk launcher on top, easily triggered through the back, (the box brings three disks), and another one with a lookout post that has space for a stand position for the soldier. 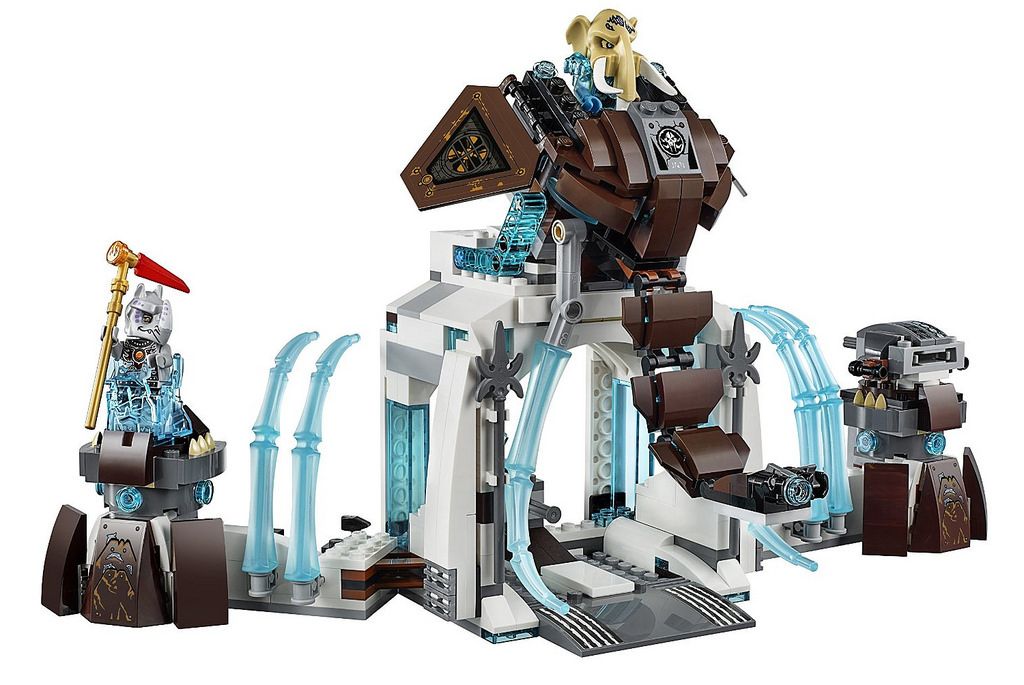 The two vehicles are similar in terms of size, however they’re completely different in terms of features and design. The Mammoth’s car is surely inspired in its tribe, being the seat placed just at the back. The big white wheels give a good contrast in terms of aesthetic and nearby the soldier there are also a couple of flick fire missiles.

The rhinos show a powerful tricycle, built upon a technique structure, with a big horn at the front. With flames almost everywhere, it has a nice piloting position that includes a handle bar and a small control panel. Just like the Mammoths, this one is also equipped with a couple of flick fire missiles, placed aside the driver and stuck to the technique pieces.

The mini-figures couldn’t be better in my opinion. They’re extremely accurate with lots of nice details (the new Mammoths are definitely pretty good…) and all of them brings powerful assorted weapons. Overall for around seventy dollars I would say that this looks an interesting option if we consider all its playability and also the great mini-figures. Have a look at the gallery: