The Ultracopter seems absolutely one of the best Ultra Agents sets of the new 2015 first wave of releases. The set besides the Ultra Agents heli, features also four mini-figures (the agents Solomon Blaze, Caila Phoenix and Max Burns and the evil AntiMatter) and a small flying for Antimatter.

The Helicopter is incredibly big, with more than six hundred pieces, measuring around forty six centimeters full of really nice features from one edge to another. Built mostly with black bricks, it mixes also plenty of blue transparent pieces which definitely give the vehicle a very cool look.

The front shows a double cockpit with different levels with the respective windshields. In this part of the heli, there are weapons everywhere which makes this Ultracopter as one of the heaviest of the last times in terms of fire power. Having a look at the front there are two double cannons, aside the pilots a couple of extra new blaster guns and if we look a bit at the back, there also two loaded spring guns. Absolutely awesome! The landing gear curiously at the first glance looks quite small but it’s similar to many others present on other planes. Just behind the cockpits, a big blue knob allows to move up and down a small winch where one of the agents can be easily moved or pulled in order to catch Anti Matter.

In the middle, like most of helicopters, there a big space, this time with a glass door, with plenty of space to transport the agents. Next to it, an extra compartment allows to store weapons and other accessories. On top, the engine and the propellers show a nice and complex mechanism made mostly with technic pieces that seems incredibly nice to build. With at least a couple of sheaves and a few technic bricks I’m tempted to say that somehow there will be probably a nice rotating mechanism of the big propellers. 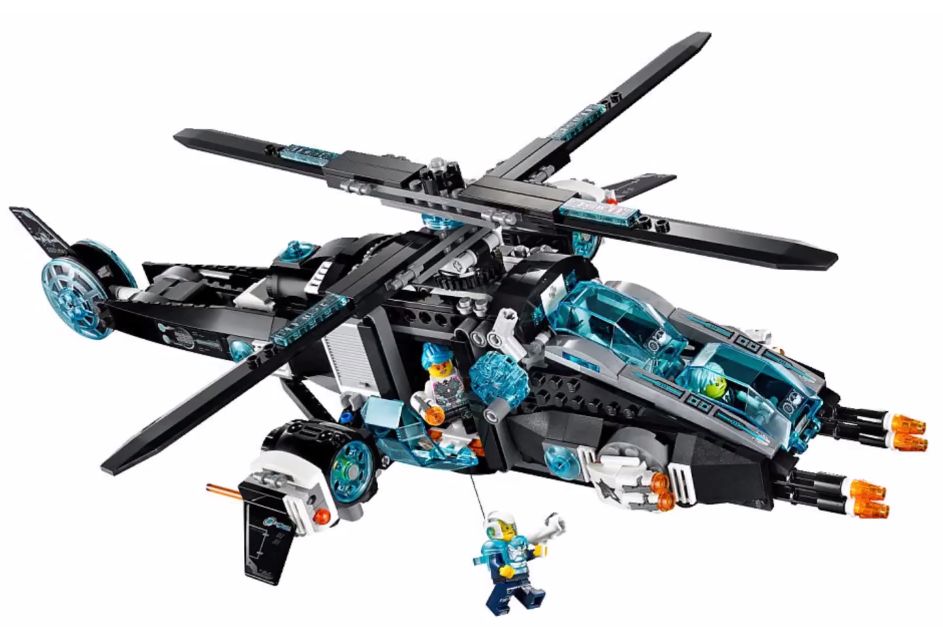 The tail is also particularly long and detailed showing plenty of different pieces with especial relevance for the two blue dishes on the edges. AntiMatter bets on the agility of its small flying object to fight back the heli. The small dark disk is equipped with two fire missiles and has on top a couple of studs for Matter’s standing position.

Overall it’s definitely a very enthusiastic set. The helicopter looks incredibly detailed with lots of different weapons and the four mini-figures are once again quite accurate. I would certainly highlight Anti Matter and Caila Phoenix, this time with blue hair as one of my favorites! The worst part is probably the price that should be something around the sixty dollars. Have a look at the gallery and enjoy!