The Drillex Diamond Job is a new Ultra Agents set that has just hit stores. With three hundred and twelve pieces, it features a double driller vehicle, ready to attack and steal the museum, two mini-figures (an ultra agent and Drillex) with assorted weapons, a small Diamond stand and a cool mini driller.

Through the official images, I would say that this Driller isn’t just an ultra agent vehicle. Technic gives also a big contribution to the powerful machine because everywhere you look, it is possible to see a lot of technic bricks.

Starting by the base or chassis, that not only supports all the structure from every major parts but also receives the big caterpillar six weeks. At the front, the two drillers are attached to a structure that rotates 360 degrees (through the pictures we can also see that the couple of drillers are also rotatable) which is definitely awesome in terms of playability.

In the middle, the orange bricks seem to hide a powerful engine and once again, a considerable number of technic bricks are responsible for all the features of the driller’s heart. At the back, Drillex has a pretty cool cockpit, slightly buried, protected by a curious red windshield and a couple of stud shooters on each side. Finally, the small diamond stand is very simple to build, but if we have a close look at it, it looks definitely very harmonious with jewel right in the middle. 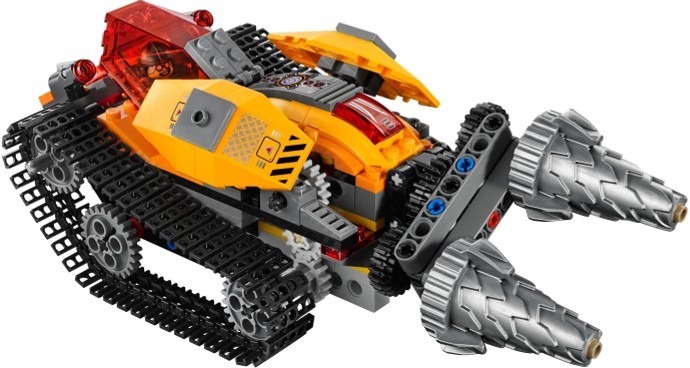 Overall this seems a pretty interesting set. The two mini-figures are pretty accurate and the driller is very unusual but at the same time quite interesting, with one or two appealing features. The set that includes an appbrick Gadget with three app bricks, is already available and retails around the thirty dollars. Please have a look at the gallery and enjoy!